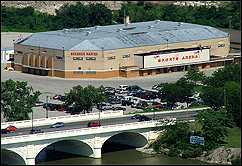 TOLEDO, OH (CelebrityAccess MediaWire) — The wrecking ball will demolish the Toledo Sports Arena on July 23rd, despite delays pushing the date back two weeks. Officials have stated that the new date is “flexible and may change again.”

The Toledo landmark will be razed to make way for a new hockey arena. Construction crews are busy preparing for asbestos problems and structural issues that could affect the demolition process.

Mayor Carty Finkbeiner said he understands that many fans will miss the historic venue, but is still excited about the new facility.

“We’re looking forward to the new beautiful facility downtown,” Mayor Finkbeiner told the Toledo Blade. “But there is a sentimental value here.”

Sports Arena fans were given the chance to purchase the bright red seats that filled the arena for $10 in cash last weekend, grabbing a piece of their favorite seating areas for local sports games.

The crew in charge of demolition recently came under fire from the city, when City Council-mandated minority worker quotas were not met. The company, B&B Wrecking & Excavating Inc., was accused of forging a signature by a minority-run trucking company to help meeting the minority contracting goal, when no relationship ever existed between the companies.

Joe Zunk, superintendent of Lathrop Co., the firm designated to be the arena’s project manager, told the Blade that he believes the two companies will negotiate a contract, and said that all work will be completed as planned. –by CelebrityAccess Staff Writers