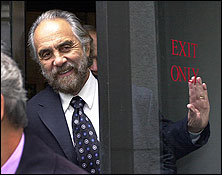 Ideal Entertainment Group and Magic Arts & Entertainment will add Tommy Chong to the cast of The Marijuana-logues for dates at the N.Y. Actors Playhouse December 7-19 and premiering on the West Coast beginning February.

Chong, best known for his legendary contribution to American counterculture in the comedy team Cheech & Chong, spent nine months in a federal prison following a zealous campaign by former Attorney General John Ashcroft to "set an example" with those he viewed as glorifying pot use. Currently on probation, Chong commented, "They came after me because of the movies…and because of my act since 1968."


The Marijuana-logues is written by Arj Barker, Doug Benson and Tony Camin and directed by Jim Millan. (Disclaimer: This production does not glorify drug use. Rather, it illustrates that cannabis culture is a thing of substance, humor and creativity). "From hazy to highbrow, The Marijuana-logues proves that the stories surrounding the bud are as varied as those who indulge," says the producers.

During Cheech and Chong's reign, they recorded six gold comedy albums, including the 1974 Grammy winner Los Cochinos, and starred in seven films, most of which Chong co-wrote and directed, such as Up in Smoke, one of Warner Bros.' Highest-grossing features. Chong can also be seen in his recurring role on Fox's "That 70's Show." — Bob Grossweiner and Jane Cohen