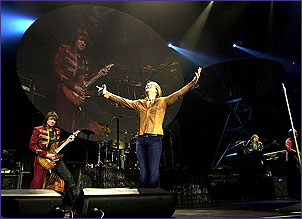 Due to popular demand, Bon Jovi have added more dates to their current sold-out tour. This summer, the band returns from their European stadium tour to play arenas, ampitheatres and stadiums (in Philadelphia, Detroit and Boston), returning to many markets where they have already played to capacity-filled crowds. The additional tour dates begin in July and conclude with a hometown, multi-night stand at Giants Stadium in New Jersey on August 7-8.

Volkswagen of America, Inc. and House of Blues are producing "Radiovw.com presents Jason Mraz with special guest Michelle Penn," an exclusive House of Blues seven-city tour April 21 in Myrtle Beach. The tour is the fourth in a concert series between House of Blues and Volkswagen. Previous tours featured The Supreme Beings of Leisure, Kinky, and Keb' Mo'. The series is sponsored by "RadioVW.com," a 24-hour, continuous live-stream Internet radio station featuring Volkswagen's take on music including some emerging unsigned artists.

"Both Volkswagen and House of Blues recognized the value in facilitating a strong connection between music and consumers and have found the concept of the 'VW Tours House of Blues' a viable and valuable partnership," said Tesa Aragones, director of eBusiness for Volkswagen. "Pairing a breaking artist like Jason Mraz with our featured RadioVW artist Michelle Penn is another way Volkswagen can introduce new music to our customers while providing
continuous support to emerging talent."

May 5 Orlando, FL House of Blues

May 12 Chicago, IL House of Blues

May 20 Anaheim, CA House of Blues

The All-Star Traditional Jazz Clarinet Showdown and Big Sam's Funky Nation are among a dozen groups set to perform at MO Fest concerts — "MO" is for mayor's office — at Woldenburg Park on April 28-29, the Monday and Tuesday after the first Jazz Fest weekend.

"We plan to make MO Fest an annual Jazz Fest tradition and hope international music industry executives will use it as an opportunity to see what New Orleans has to offer," Nagin said recently.

The New Orleans Jazz & Heritage Festival is set for April 24-May 4.

Vocalists Scott Weiland (Stone Temple Pilots) and Sebastian Bach (ex-Skid Row) appear to be the leading candidates to become lead singer of the Project, which consists of former Guns N' Roses members Slash, Duff McKagen and Matt Sorum. According to MTV News, Weiland is the leading candidate; however, Weiland is either in or about to enter drug rehab. Bach was recently in a road show production of Jesus Christ Superstar but was booted for undisclosed reasons.

Cherrywine's May Northeast tour has been postponed due to a serious illness within one of the band members’ families. Tour dates that will be rescheduled for either June or July are:

May 3 Toronto, ON El Mocambo