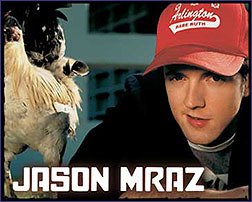 Volkswagen of America, Inc. and House of Blues are producing "Radiovw.com presents Jason Mraz with special guest Michelle Penn," an exclusive House of Blues seven-city tour April 21 in Myrtle Beach. The tour is the fourth in a concert series between House of Blues and Volkswagen. Previous tours featured The Supreme Beings of Leisure, Kinky, and Keb' Mo'. The series is sponsored by "RadioVW.com," a 24-hour, continuous live-stream Internet radio station featuring Volkswagen's take on music including some emerging unsigned artists.

"Both Volkswagen and
House of Blues recognized the value in facilitating a strong connection between music and consumers and have found the concept of the 'VW Tours House of Blues' a viable and valuable partnership," said Tesa Aragones, director of eBusiness for Volkswagen. "Pairing a breaking artist like Jason Mraz with our featured RadioVW artist Michelle Penn is another way
Volkswagen can introduce new music to our customers while providing
continuous support to emerging talent."

May 5 Orlando, FL House of Blues

May 12 Chicago, IL House of Blues

May 20 Anaheim, CA House of Blues