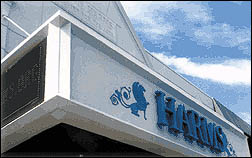 The John Harms Center for the Arts in Englewood, NJ abruptly shut its doors on April 14 due to a mounting of $2.3 million debt which the venue realized it could not over come. The intimate 1,400-capacity venue opened in 1926 as a silent movie and vaudeville house and in recent years was a concert venue.

"I'm very sorry to inform you that negotiations over the weekend failed to resolve our $2.3 million debt crisis, which originated and has been looming over this center since the 1990's," Robert Stern, the president and chief executive officer of the center's board, told the staff at a meeting. "Therefore, this morning we were left with no other choice but to close operations, terminate staff and cancel all scheduled performances effective immediately."

Les Ballets Trockadero de Monte Carlo was to perform there this week. Saxophonist David Sanborn was scheduled to appear next month, and in June there was to be a production of "West Side Story."

According to the New York Times, "like many other cultural centers, the John Harms suffered a decrease in ticket sales and donations after the terrorist attacks of Sept. 11, 2001. Last summer, ticket sales had decreased by $100,000 from the previous year, and corporate donations were down $150,000. Those decreases only added to problems the center already had in eliminating a huge debt acquired during a $6.6 million renovation of the theater that included a new roof, air-conditioning, a new sound system and marquee, and additional seating. In 2001, a new fiber optic cable linked the theater to the nearby Bennett Recording Studios used to record performances by Tony Bennett and kd lang."