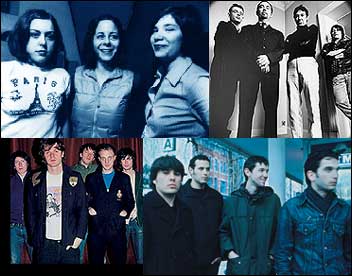 Pearl Jam's 2003 Riot Act American tour has secured support acts for all but the last two shows. Sleater-Kinney will open 11 concerts from April 1-18 followed by Sparta also for 11 shows April 19-May 3. After a few weeks off, Idelwild will open 18 concerts from May 28-June 18 followed by buzzcocks for nine shows June 21-July 5. No support act has been named for the last two shows July 8-9.

Pearl Jam will release an official bootleg of each show on their 2003 Riot Act world tour. Each bootleg will be a limited edition, double disc CD set. Unlike the 2000 bootleg series, the 2003 bootlegs will not be available in stores. Currently, the band plans to make them available only at the following URL addresses:

Bootlegs will be sold for $12.98 to Ten Club Members and for $14.98 to non Ten Club members. Additionally, anyone who orders an official bootleg will be able to download at no additional cost an mp3 of that show within hours of the show's real-time completion. "We wanted to provide fans with a souvenir of the show they experienced immediately following the show — this comes pretty close," says Tim Bierman, Pearl Jam's 10-club manager.

Bootlegs can be pre-ordered now for Pearl Jam's Australian and Asian tours, which kick off in Brisbane on February 8 and in Sendai on March 1, respectively. Pearl Jam originally conceived of the bootleg series as an effort to "bootleg the bootleggers" by making available for sale less expensive, higher quality recordings of all of their live shows.

Bon Jovi will headline Tiger Jam VI Presented by Coca-Cola, and hosted by Tiger Woods on April 19, at Mandalay Bay Events Center, Las Vegas, NV. The annual benefit concert raises and distributes funds for the Tiger Woods Foundation and children's charities based in Las Vegas and Los Angeles. The Goo Goo Dolls are also on the bill.

"Tiger Jam has had outstanding talent every year, and we've continued that tradition with Bon Jovi," Tiger Woods said. "I grew up listening to Bon Jovi, and I'm really looking forward to seeing them live. It means a lot to me that Jon and the guys have joined in my efforts to support today's youth through Tiger Jam."

"We're very excited," Jon Bon Jovi said. "It's a thrill to be helping Tiger fulfill his dreams of fulfilling the dreams of others."

Proceeds from Tiger Jam VI will be used to support the many programs funded throughout the year by the Tiger Woods Foundation. Charities that received funding from Tiger Jam V include Child Haven, Center for Independent Living, Greater Las Vegas Inner City Games, Boys &Girls Club of Las Vegas, UNLV Women's Athletics, GRAMMY in the Schools and The VH1 Save the Music Foundation.

Established in 1996 by Tiger Woods and his father Earl, the Tiger Woods Foundation empowers young people to reach their highest potential by initiating and supporting community-based programs that promote the health, education and welfare of all of America's children.

The Elton John-Billy Joel concert package is all go even after Joel's recent automobile accident. The 2003 dates kick off February 21 in Birmingham, AL and wind down May 2 at Auburn Hills, MI for a total of 21 concerts. The Joel/John package, which teamed together in 1994, performed 34 arena shows last year grossing $66 million.

Yanni will kick off the first leg of his world tour, his first in five years, March 1 in Las Vegas. Touring in support of his forthcoming album, "Ethnicity", due February 11, the 58-city arena road trip winds down June 1 in St. Louis.

"Many of the world's cultures are represented on this album," Yanni says.. "It has a lot of ethnic color — in other words, it has ethnicity. Ethnicity has to do with race and culture, and — in the way I use it for this album — the
color and beauty of a multicultural society."

Coinciding with the album's release is his memoir, "Yanni in Words," (Miramax Books), written in collaboration with David Rensin.

With two months to go before opening night of "A New Day …" Featuring Celine Dion, ticket sales are well beyond expectations with over 200,000 of a possible 240,000 tickets sold for the first sixty shows. With some shows already completely sold out, tickets are still available on a limited basis for most performances. Produced by Concerts West, an AEG Company, the show is currently in rehearsals at The Colosseum at Caesars Palace, Las Vegas.

To help ensure that fans and prospective Las Vegas visitors receive first priority on tickets, a unique marketing plan is being followed that releases tickets in timed blocks. The first three-month block, with 60 shows, launched in late May 2002, with sales to Celine's fan club and resort guests (through room/show packages) via Celinedion.com and Ticketmaster.com . Beginning last month, the box office at The Colosseum at Caesars Palace, Las Vegas was opened to the public.

"We're extremely pleased that our ticket-selling strategy has enabled 200,000 Celine Dion and Franco Dragone fans around the world to purchase tickets so far, said John Meglen," co-CEO Concert West. We are looking forward to sold out shows throughout the three-year run of 'A New Day …'

Three international travel agencies have been authorized to sell ticket packages to help ensure that oversees fans have the opportunity to obtain tickets. These agencies include The Newmarket Group in the United Kingdom, Gilbert Coullier in France and Artistours in Quebec for Canada. Collectively, and more than 6,000 packages have been sold for the first three months in these territories.

"A New Day …," created by DRAGONE, features Celine Dion and an international cast of 60 dancers, musicians and artists chosen from thousands who applied through worldwide auditions. Directed by Franco Dragone, director of the enormously successful Alegria, Quidam, "O" and Mystere shows by Cirque du Soleil, the show is a combination of song, live performance and theatrical innovation.