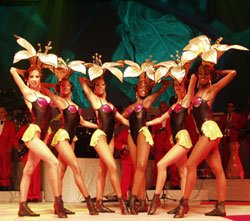 (CelebrityAccess MediaWire) — A troupe of 53 Cuban entertainers scheduled to perform a six-week run at the Stardust Resort & Casino in Las Vegas starting July 30, is being denied access to the United States by the Cuban government, according to show producers.

The efforts to bring the lively Broadway-style "Havana Night Club — The Show" production to the Unites States is backed by the famed Siegfried & Roy who wished to bring the cultural extravaganza to this country.

"Because we are not connected to the Cuban government, the United States has approved travel for all 53 cast members," said Nicole "ND" Durr, the creator/producer/artistic director of "Havana Night Club — The Show." "The performers have every intention on returning to Cuba — they love their country, their families and their culture. They just want the opportunity to share their talent with the world. They just want to dance."

According to Durr, Havana Night Club is the first show of its magnitude from Cuba to perform in the United States in 50 years. The show features "the new generation of Cubans" with entertainers as young as 18.

"This isn't about politics, it is about art and freedom of speech," said Durr. "I want the world to see, through this show, the glorious untouched talent of Havana. They are the Rosa Parks of Cuba. They are truly nongovernmental."

Havana Night, a German-English owned company, has toured 16 countries and has been seen by two million fans since it premiered in 1999. Durr joined forces with presenters and associate producers Siegfried & Roy, who began their careers in Las Vegas on the same stage at the Stardust more than 28 years ago, along with Emmy-Award winning director and choreographer Kenny Ortega (Barbra Streisand, Cher, Madonna, Opening Ceremony/Salt Lake 2002 Olympic Games) and set designer Michael Cotten (Gloria Estefan, N'Sync, Michael Jackson and Aerosmith) who designed each of the show's 16 elaborate scenes. — Bob Grossweiner and Jane Cohen