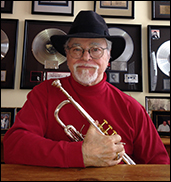 MEMPHIS, TN (CelebrityAccess) — Wayne Jackson, a trumpeter who helped define the Stax Record as a part of their house band The Memphis Horns, died on Tuesday in Memphis. He was 74.

According to the New York Times, Jackson's wife Amy said that he died at Methodist University Hospital in Memphis of congestive heart failure.

A native of Memphis, Jackson made an early name for himself with the trumpet and scored his first gold record with the instrumental "Late Night" performed with Stax Records first house band The Mar-Keys. The group, who began playing together in high school as the Royal Spades, provided the backing music that became the structure around which the storied Stax Records sound was built around. Other alumni from the group include Booker T. Jones, Donald "Duck" Dunn, Steve Cropper, and Andrew Love.

At Stax, the group performed and cut records with a litany of artists that included Albert King, Sam & Dave, Rufus Thomas, Otis Redding, and others.

After years of playing together at Stax, the group formed the Memphis Horns and became sought-after freelancers, providing the Memphis sound for artists ranging from Elvis and Al Green to Willie Nelson and U2. As well, the Horns would tour extensively, providing live support for the Doobie Brothers, , Robert Cray, Jimmy Buffett and Joe Cocker, as well as recording nine of their own albums between 1970 and 1996.

In 2012, the Memphis Horns received a Grammy Lifetime Achievement Award for outstanding artistic significance in music.

According to the Times, Jackson is survived by his wife; a brother and sister; and four children. – Staff Writers