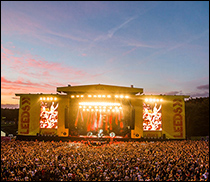 LONDON (CelebrityAccess) — Two teenagers are facing police questioning following the death of a 17-year-old boy at the Leeds festival over the weekend.

Leeds festival police commander Ch Supt Keith Gilert told the Guardian: “Our thoughts are naturally with the family of the young man at this time. They were made aware of the incident by officers as soon as possible and were assisted to attend the hospital as quickly as possible. We will continue to support them through this difficult time.

“We are currently investigating the death and how he obtained the substance he took. At this time the indications are that the man consumed drugs immediately before he collapsed. A report will be sent to the coroner in due course.”

The Creamfields Festival, which also took place last weekend was also marred by a death.

According to the Liverpool Echo, Joe Sheppard, a 26-year-old Cornwall man died after suffering breathing difficulties in his tent while at the festival. Paramedics were alerted to his distress but were unable to save him.

A Cheshire Police statement said: “We were notified following concerns for a man in one of the campsites and, sadly, a 26-year-old man from the Cornwall area passed away.

“Formal ID is to take place and we are awaiting the results of the post mortem examination to establish the cause of death."