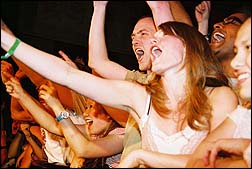 LONDON (CelebrityAccess MediaWire) — The days when live music was a game for the young seem to be over say top UK music impresarios.

The popularity of live music has been exploding across the pond and its growing popularity seems to reach across all audience demographics. "The UK live music scene is more buoyant now than I can ever remember it." Stuart Galbraith, managing director of live entertainment promoter Live Nation told the BBC in a recent interview "[Audience] age range literally runs from eight to 88, and there is an active market in every single one of those age brackets."

As previously reported, the festival scene has exploded across the pond but its not limited to festivals. Large and small venues across the isles of Albion are seeing strong increases in ticket sales and event attendance.

As to why this trend seems to be taking place, Galbraith offered "I think there are generally more people interested in music full stop and I think that the breadth and depth of talent in the UK is unprecedented," adding that "Live music is the ultimate experience. It's not bootleggable, you can't replicate it, you can't steal it, and you can't mimic that experience of actually standing at a gig – the roar of the crowd, the smell of the greasepaint."

The convergence of increasing sales for live music and decreasing sales for traditionally-distributed recorded music is affected by a number of factors. The money available to artists for live performance provides a significant incentive to get out on the road. New ways of promotion such as music blogs and websites like MySpace are turning people on to new and diverse music that they may never have experienced in the days when format radio was the only point of access for many music consumers and the burgeoning availability of live music as more and more promoters try to stake a claim in this audio gold rush.

Ultimately though, this may be deleterious. As any economist can tell you, the law of diminishing returns will exert itself as the market nears its capacity. At present though, that time seems still lodged safely in the distant future. – CelebrityAccess Staff Writers