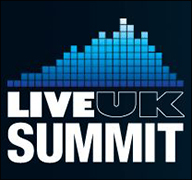 LONDON (CelebrityAccess) – More than 300 delegates from across the live music industry, including grassroots music promoters, stadium operators and festival organizers, gathered for the annual LIVE UK Summit on 15 October, discussing issues ranging from ticket abuse and territorial booking to branding and fan-driven apps.

The forum addressed a range of subjects, including the controversial subject of secondary ticketing, with Kilimanjaro Live’s Stuart Galbraith receiving an ovation from delegates attending The Music Chamber: Politics & Live session, after proclaiming, “Secondary ticketing companies are parasitic, feeding off the creative arts.”

The debate included the Government’s review of the secondary ticketing sector, the imposition of business rates on farmland where festivals are staged and the growth in fake ticket scams.

The Masters of the Universe panel, which featured international agents Rob Hallett of Robomagic Live, Coda Agency’s Solomon Parker and Primary Talent International’s Dave Chumbley, talked of an expanding global marketplace and the disadvantages of American-style territorial booking, when an agent is given a sector to book, rather than having responsibility for an artiste’s whole live career.

There was only standing room left for The Summit Interview, which featured United Talent Agency’s new global head of music Neil Warnock, who revealed everything from the first record he bought (What Do You Want by Adam Faith), to the genesis of his career, working with Liza Minnelli, Pink Floyd, Michael Jackson and the Rolling Stones.

Questioned by interviewer David Stopps, Warnock reminded the audience, “We are in business to make money, we all love our artistes but in the end, we all want to take out a few quid.”

Other panels covered the importance of programme diversity at venues, social media, ticketing and the collection and use of fan data.

Entrepreneurs and marketing experts discussed the future of digital commerce, the rise of experiential and boutique festivals, and the fragmenting ticket market.

“This was the best Summit we’ve had and it’s always great to see important issues discussed intelligently by people who really know their business,” says the event’s executive producer Steve Parker. “The interview with Neil Warnock was particularly illuminating and it’s good to be reminded that Pink Floyd once went out for a flat fee of £475.”