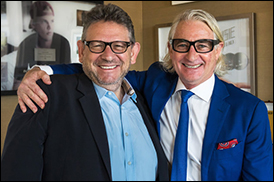 SYDNEY, NSW (CelebrityAccess) — Label giant Universal Music Group has taken a stake in indie label Petrol Records, the home to to the recordings of INXS outside of North America.

A joint venture announced as a part of the deal follows the news of the production of a feature-length documentary on the extraordinary life of INXS lead singer Michael Hutchence and will will lead the way for new audio releases, as well as projects including additional films, theatrical productions, live events and fan conventions.

Murphy, who serves as Chairman of Petrol Records, signed INXS to his label in 2009 and created his “Band to a Brand” strategy, creating projects including a film, television and live events that re-engaged fans and expanded the band’s audience.

In 2014, Murphy was the Executive Producer of the INXS television mini-series, Never Tear Us Apart, which set viewing records in Australia.

Over the last 30 years, INXS has consistently been the biggest selling Australian artist, winning multiple international awards. Recently, at a reception in Sydney, UMG announced the band’s Very Best album has eclipsed their previous sales record by achieving 6 X Platinum status on the eve of the 39th anniversary of the group’s first-ever performance.

The band was also presented with a Triple Platinum award for the DVD of their LIVE BABY LIVE show at Wembley Stadium from July 1991. – Staff Writers