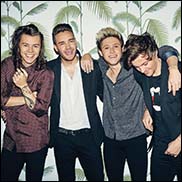 LONDON (CelebrityAccess) — After rumors started circulating this week that the members of One Direction were planning to split in March of next year, band members Niall Horan and Louis Tomlinson took to Twitter to reassure fans that they were just planning a hiatus and splitsville forever.

"Ok so Lots of rumours going round. We are not splitting up, but we will be taking a well earned break at some point next year," Horan tweeted.

The group's longtime producer/songwriter Julian Bunetta seemed less sanguine, telling Billboard that the 1D boys had been planning to take a break for a while and commenting on the sense of uncertainty about the future of the group.

"There was a feeling of, ‘Well, we’re going to take a break, and anything in the world can happen during that time off,’" Bunetta,told Billboard. "It’s the first time of there being some uncertainty, of not having things planned out beforehand, since they were 16 years old. There was definitely a vibe of making [the album] the best it can possibly be, and knowing it has to last as long as it needs to until we make another record — if we make another record."

1D released "Drag Me Down," the first single off of their upcoming 5th album on July 31st. The track debuted at #3 on he Billboard Hot 100 and sold 500,000 digital copies and had 17.7 million streams in its first week. The band's planned hiatus likely means that they will not be touring behind their upcoming album. – Staff Writers