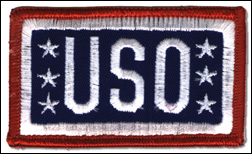 The USO's "Comedy Break" tour, a staple of USO Celebrity Entertainment since 1995, is back again and will entertain troops stationed in the Pacific June 9-19.