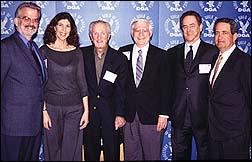 (CelebrityAccess MediaWire) – Phil Gersh, the venerable Hollywood agent who founded The Phil Gersh Agency, later overseeing its evolution into The Gersh Agency with sons Robert and David, has died of natural causes at the age of 92.

In 1949 he founded his own business, The Phil Gersh Agency, establishing a reputation as both a principled gentleman and a tough negotiator. Helping secure key roles for his clients — among them, Bogart in Sabrina, Niven in Around the World in 80 Days and Wise as director of The Sound of Music — Gersh also supported the careers of such actors as Zero Mostel and writer Abraham Polonsky during the blacklisting days of the McCarthy era.

In the late 1970s Gersh was joined by his son Bob, who would develop the careers of such actors as Cindy Williams, Dennis Quaid and Michael J. Fox. His other son, David, left a career in law to join the agency in the late 1980s, expanding the literary department of the agency with the founding of a New York office in 1992. Gersh continued to remain on the front lines, representing filmmakers Richard Benjamin and Leonard Nimoy, cinematographer Don McAlpine, production designer Jeannine Oppewall, editor Michael Kahn and others.

Changing the name of the now family-run business into The Gersh Agency in the early 1990s, Gersh was integral in building it into one of Hollywood's most successful firms, remaining active with its operations and key clients until March 2004. Under his leadership it has remained independently owned amid an industry rife with behemoths, while organically growing into a vibrant company representing a breadth of actors, directors, producers and below-the-line professionals.

Born in 1911 to immigrant parents who ran a New York City delicatessen, Gersh graduated from UCLA and joined the agency of his brother-in-law Sam Jaffe, beginning as an "office boy" for $15 a week and quickly advancing to become a successful agent. He was drafted into the Army in 1942, fighting overseas in the tank destroyer battalion, before returning to California in 1945. Four years later, after reentering the business with Famous Artists Agency, he launched The Phil Gersh Agency, subsequently purchasing the Beverly Hills building that housed it in 1968.

Among his philanthropic commitments, Gersh was a founder and benefactor of the Los Angeles Music Center and an active supporter and Chancellor's Associates member of his alma mater, UCLA. He served on the board of directors of the Motion Picture Television Fund and was a major benefactor, as reflected in the recent dedication of the Beatrice and Phil Gersh Dining Terrace. A founder of the Los Angeles County Museum and board member of the Beverly Hills Fine Arts Committee, he has also been an avid art collector since the 1950s. Today, the Gersh family holds one of the largest private collections of 20th century art, including originals by Picasso, Warhol, Lichtenstein, Kandinsky, Kline, Oldenburg and Kelly. During the last several decades Phil and Beatrice Gersh have donated pieces to several prominent art institutions including MOMA and MOCA, the latter of which he served as a founder and donor.

Gersh is survived by his wife of 59 years Beatrice Aberle Gersh, by his sister Pearl Sindell, his sons David and Bob and their wives Susan and Linda, and his grandchildren Steven, Laura, Jessica, Billy and Annie. Donations can be made to the Motion Picture Television Fund and/or MOCA. –Bob Grossweiner and Jane Cohen