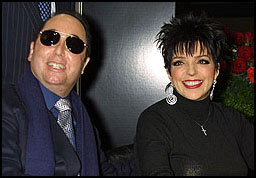 Liza Minelli could soon be recording an old George Harrison song: "Sue Me, Sue You Blues."

As reported in CelebrityAccess previously, Liza and her new husband David Gest sued VH1 over the cancellation of their planned 'Liza and David' reality show. According to the Los Angeles Times, VH1 has now countersued, alleging that the "unprofessional, erratic and deceitful conduct" of Gest had gone "far beyond the acceptable bounds of show business eccentricity."

According to the lawsuit, Gest's real-life vanity was equal to the most demanding divas. VH1 had to spend well over 30 times as much on his clothes as on Liza's. He required that his personal assistant and hairdresser be flown to NYC from LA for the filming, and demanded that the network spend $60,000 to rent an apartment near Liza's for the stylist. He also tried to block and disrupt filming when he felt that he didn't look his best, and he attempted to block the crew from filming or even contacting Liza without his consent.

And that's just for starters….

In addition, VH1 claimed that Liza and David told the network that the condo board had given full approval to extensive filming. Instead, no approval had been obtained — and ultimately, the condo board limited VH1 to 10 days of filming in the condo per year, far less than VH1 wanted.

Finally, Gest was so obsessed with cleanliness that he might even have embarrassed Felix Unger, the fastidious member of "The Odd Couple." The network alleged that Gest refused to allow crew members to sit on the furniture or even drink bottled water at Liza's Upper East Side condo. When some holes were drilled in the wall for recording equipment, Gest demanded that a VH1 crewman "stand by the hole with a vacuum cleaner in hand so as to instantly remove any dust."

Not even a vacuum cleaner is powerful enough to pick up all the dirt that will come out if this case goes to trial. Stay tuned.