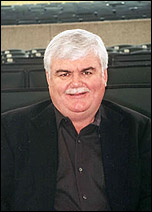 "We are delighted that Jerry has agreed to assume the role of president and CEO of The Cynthia Woods Mitchell Pavilion," Gottlieb said. "With our 14th season on the horizon, Jerry brings a unique set of skills and experience necessary for the continued growth of this organization." MacDonald comes to The Center with 26 years of senior management experience in operating a variety of entertainment venues. Since December 1995, he has been the general manager of Compaq Center in Houston. As general manager, MacDonald was responsible for the overall management of the 17,000-seat arena, home of the Houston Rockets, Houston Comets, Houston Aeros and a variety of concerts and events. He managed the facility during its most profitable years, generating $24 million in profit and booking a record number of events. MacDonald also implemented the naming rights agreement for Compaq Center, oversaw $5.4 million in renovations, and coordinated rebuilding efforts following damage from Tropical Storm Allison.

Prior to Compaq Center, MacDonald was responsible for the opening and overall management of two venues that were home to professional and college basketball teams. From 1990-95, he was general manager of The Pyramid in Memphis, Tenn., home to the Memphis Grizzlies and the University of Memphis basketball program. From 1987-90, he managed Miami Arena in Miami, home to the Miami Heat and the University of Miami basketball teams. He also was the general manager of the Ocean Center in Daytona Beach, Fla., from 1983-87 and Lakeland Center in Lakeland, Fla., from 1976-83.

“I am confident that Jerry has the vision and leadership skills necessary to ensure the future growth of this organization,” said Robert Marling, chairman of The Center's board of directors. “He’s enjoyed tremendous success in the management of numerous entertainment venues and I am sure his expertise in this field will carry over to The Pavilion.”

MacDonald has lived in The Woodlands with his wife, Tricia, and daughters, Sally and Stacy, for the past seven years. Both of his daughters graduated from The Woodlands High School. “As a professional in the entertainment industry in Houston and a resident of The Woodlands, I know the wonderful reputation this organization has, both in this community and the Greater Houston area,” MacDonald said. “I look forward to working with the Center’s dynamic board of directors and leading this organization through many more years of continued success.”