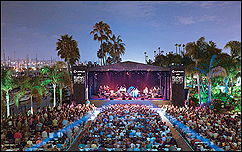 Viejas is well known in the area for its competing Viejas Concerts in the Park series in Alpine and Viejas Concerts at Bayside series at downtown San Diego’s Embarcadero Marina Park South. Over the past seven years, Viejas Entertainment has engaged Humphrey’s in several high-stakes bidding wars over popular artists.

The new partnership was launched last fall, following the retirement of producer and talent buyer Kenny Weissberg, who had guided Humphrey’s for most of its 25 years.

“It was the right decision to pick Viejas and I’m really glad I made it,” Humphrey’s owner Richard Bartell told the San Diego Union-Tribune. “We’ve developed a great relationship and we’re very happy with how they’ve performed for us.”

House of Blues, Live Nation and Nederlander all made bids to replace Weissberg last fall, but Bartell chose Viejas despite their tumultuous past.

“The initial reluctance was based on the nature of our relationship, which was that Viejas was an adversary,” Bartell explained. “We’d been competing for years for top-name performers coming to San Diego. So to enter into a relationship that would allow them to book our shows was something I naturally had some reluctance and skepticism about.”

Bartell is more than excited about this year’s concert season, telling the paper that Humphrey’s has “the strongest lineup we’ve had in many years.”

He believes this year could set an attendance record for the 1,400-seat outdoor venue, with slated acts ranging from Humphrey’s perennials like B.B. King and George Benson, to newcomers like Musiq Soulchild, comedian Paul Rodriguez, k.d. lang, Ani DiFranco and Queen Latifah.

“I think the biggest fear Humphrey’s had – and mind as a talent buyer – was that we’d put all the good shows at Viejas and the mediocre ones at Humphrey’s,” Wojas told the Union-Tribune.

“We told Richard that not how we’d do it, and it isn’t. We talked in advance about which shows would work best at Humphrey’s and which would work best at Viejas. It is weird to walk into a situation where you replace a person who has been there 23 years. Kenny and I are very different in our styles.”

Bartell is reportedly so pleased that he’s already talking about renewing his partnership with Viejas beyond their one-year contract for this season. –by CelebrityAccess Staff Writers