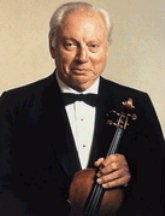 Stern was one of the last great violinists of his generation and helped the careers of generations of musicians who followed, including Itzhak Perlman, Pinchas Zukerman and Yo-Yo Ma.

He was one of the most recorded classical musicians in history, making well over 100 recordings.

A supporter of Israel, tireless concertizer, teacher and raconteur, Stern played well over 175 performances by the late 1990s at Carnegie Hall, America's musical temple renowned for its acoustics.

Built by industrialist Andrew Carnegie and opened in 1891, "Carnegie was, is and will not be only a building. It's an idea. It's a mythology, a necessary mythology about music," Stern said in a 1997 interview with CNN's Larry King.

In the late 1950s, when the city was planning Lincoln Center, a developer proposed razing Carnegie Hall and building a 44-story office tower with panels of bright red porcelain and diagonally placed windows.

Using his prestige and his contacts among fellow artists and benefactors, Stern rallied the opposition, eventually securing legislation that enabled the city to acquire the building in 1960 for $5 million.

"I talked a lot," Stern told King. "It's something I do very well. When you believe in something, you can move mountains. I knew that this could not disappear from the face of the Earth."