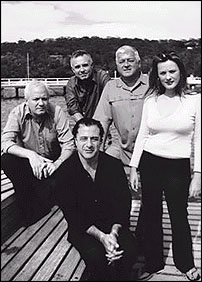 Based in Sydney, Australia but active on a global basis, Waterfront will work on a range
of entertainment projects, including major music events and touring as well as online, TV and
other ventures.

During his 25 years as a manager/agent/promoter, Righi has worked with such artists as
Eminem, Bon Jovi, P.O.D., Travis, Pink, Craig David and Diana Krall.

Pickwell, regarded a leader in Australian radio, has been creator and CEO of the popular RUMBA and
M-One music festivals for the past two years.

Businessman Lewis has been in advertising, media and music. He was most recently Asia Pacific president of the DAS organisation, Asia's top 'below the line' marketing agency, managing over 30 companies.

Rounding out the company are: Paul Christie (musician, promoter, manager, author,
industry consultant and founder of 80's Australian band The Party Boys) and Jane Warham
(most recently with Concorde International Artists in London where she worked with artists
including Prodigy, Blue, Atomic Kitten and Steps).