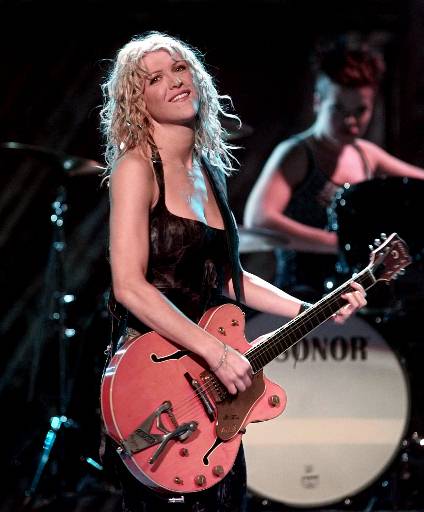 Courtney Love has appointed a new team of representatives. Her
management is being handled by New York managers Dave Lory and partner
David Leach, in association with Barber’s Red Ceiling Company. Lory and
Love have also appointed booking agents worldwide: Marsha Vlasic at MVO (North
and South America and the Pacific Rim) and Dave Chumbley at Primary
Talent (UK and Europe). Handling media for North America is PMK–Jill
Fritzo in New York and Heidi Schaeffer in Los Angeles. For the UK and
Europe, LD Communications will handle all media, headed by Bernard
Doherty and Claire Jarvis. Courtney Love’s business affairs are being
handled by Jim Zumwalt at Zumwalt, Almon and Hayes in Nashville.

Love is currently in France recording her new album
“America’s Sweetheart”, slated for release worldwide in the fall.
Produced by James Barber and featuring songs co-written with
songwriter Linda Perry, (who has recently penned hits for Christina
Aguilera and Pink), this will be Love’s first album in four years.
“America’s Sweetheart” will be Love’s first album released under
her own name; she previously recorded as a member of Hole. Several of the world’s largest record companies have sent
their presidents to France to vie for the opportunity to release Love’s
new album.