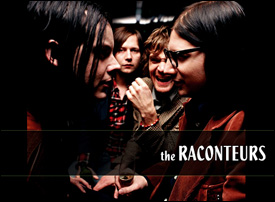 AUSTRALIA (CelebrityAccess MediaWire) — Jack White's new project The Raconteurs suffered a setback when they learned that they will be unable to use the name in Australia. When learning that a jazz band based in the land Down Under already owned rights to the name, Jack White's Raconteurs opted to use a new name “The Saboteurs” for Aussie marketing purposes only. In a statement, the pair says “The Raconteurs name was already taken by a jazz band, to make things easier, and in the spirit of espionage and subversion, we have decided to become The Saboteurs in Australia only."

Embodying the "spirit of espionage and subversion" may seem like fun to Jack White and company, but surely they must be wondering how their lawyers seemingly forgot to make the simplest of International trademark searches.

Although the Australian Jazz outfit has almost zero profile in their home country, White and Benson have decided on the name change, regardless of any legal dispute, to avoid confusion.

The debut album by The Raconteurs ‘Broken Boy Soldiers’ will be released by V2 in May.