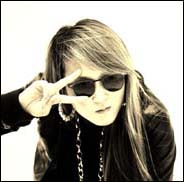 LOS ANGELES (Hypebot) — Shin-B, an up-and-coming hip hop artist nominated for a 2011 Female Hip Hop Honors Award, recently released what they claim to be the "world's first interactive music video" because of its inclusion of scannable QR codes. The QR codes appear throughout the video and link to Shin-B's site for "major contests and prize giveaways."

Though the video is well-made and the QR code works well as a conceptual and design focus, I feel there are some major issues with this approach that undermine its effectiveness as a marketing tool.

If one searches Google for "qr code in music video,", a number of examples of work in this area appear, undermining the claim to being first. In addition, a search on "interactive music video" just ruins that notion. The problem with such claims is that they are difficult to prove but often easy to disprove. Unless you've done an excessive amount of homework, claiming a first that can be disproven via easy web searches immediately undermines the impact of the announcement as a whole. It's much better to label oneself innovative and then focus on the artist's work rather than on being first as the opening hook.

In the press release from which I'm quoting throughout unless otherwise noted, the QR code is said to "lead to Shin-B’s official website with instructions for major contests and prize giveaways. Prizes include smartphones, MAC computers and clothing by Feltics Streetwear. Contests and giveaways will continuously change, which encourages viewers to keep watching the video and scan the codes for their chance to win different prizes."

That sounds like a great idea. People love winning things and the changing opportunities add the sense of a hunt to the game, which means this music video has been gamified! But this video was posted on YouTube and the upcoming contests and prizes were announced on Shin-B's website on May 8th. I'm told the link initially went to the website which explained what was up and since then has been linking to Shin-B's twitter account to grow subscribers. Currently her website features a post with the statement, "We will have our giveaway SOON."

In addition, DuNo Tran, who directed the video and came up with the QR code idea, recently stated that the need to pause the video to scan the QR code would not be off-putting because the code links to "free prizes."

Given that it's been a month without any prizes, it appears that the second major hook of the video's marketing campaign has also failed. Though I'm not claiming that these folks are out to trick people, this decision to delay contests and giveaways makes the campaign look like a bait-and-switch. Early adopters are disappointed and folks that are paying close attention get a problematic first look.

So what initially appears to be an innovative approach to creating and marketing a music video turns sour upon closer inspection due to elements that have nothing to do with the music. And that's unfortunate for any musician whose work should not ultimately be dependent on the use of emergent technology or contest giveaways.

Update: I heard back from Shin-B's camp with their take on things and I wanted to share that.

I'm told that they do agree that their use of "first interactive music video" is inaccurate but that this is still the "first to fully incorporate QR codes throughout the video" which is not done with the examples presented by my Google search. In addition, the video team spent a lot of time researching precedents and haven't found any videos where the QR code was used in such a fully integrated manner. And that's certainly an element that makes the video interesting to me.

They also explained that there was a minimum number of views required by the brands with which they were working in order to be provided with the prizes. Apparently Shin-B has clarified this in interviews and it is true that, buried in the YouTube description, there is the statement that "Contests and free giveaways will be announced soon with enough views."

So I accept that they've considered these issues and I did not really think it was a bait-and-switch maneuver. Nevertheless, I've always held that it's a mistake to claim a first that requires any kind of explanation. I also feel that if you are going to announce prizes and then wait till a certain number of views are met, then you need to tell people that up front so they understand the wait. Having good reasons does not resonate with new and potential fans who see only the results.

I think it would be much better to have the QR code go to a registration page where viewers can go ahead and register for a giveaway that will be conducted when a certain number of views are reached. You can then also add in a further game element by giving viewers multiple entries if they share the video on Facebook or Twitter so the number of views are met as quickly as possible. That's just one example of how that situation could be better managed but you see how that would go ahead and get fans involved while also providing the transparency necessary to keep from confusing people.