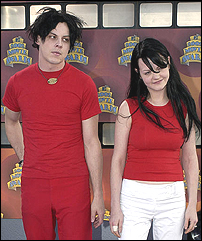 White Stripes drummer Meg White has reportedly broken her wrist after slipping on ice in New York knocking out the entire March itinerary. The duo had planned some promotional appearances in the United States for their new album, Elephant. European and American April dates are still on the itinerary.