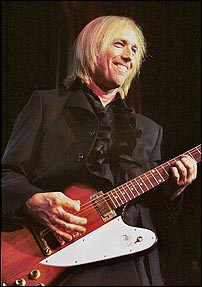 Tom Petty & the Heartbreakers' tickets that were to go on sale March 14 for the Vic Theater in Chicago have been postponed. A limited number of tickets that went on sale the morning of March 13, as part of a special Internet pre-sale, almost immediately appeared on the E-bay website for re-sale in what was termed as excessive amounts.

As a result, the management of Tom Petty, along with Jam Productions and Ticketmaster, have decided to postpone the original public on-sale date. A new on-sale date is being planned, and complete details will be announced March 18.

Included in that announcement will be a special voucher system to ensure that only those people who purchase the tickets will be allowed into the theatre. Tickets already purchased via the internet pre-sale will be honored.

"We need to make every effort so that the real fans will have access to tickets at the intended price," says the band’s manager Tony Dimitriades. Adds Jerry Mickelson from Jam, "This is a landmark event at a historic venue, and access should not be restricted only to those with the deepest pockets."

Continuing their tradition of playing multiple nights at historic venues, Tom Petty and the Heartbreakers will perform three special shows (April 14, 16-17) at The Vic Theatre in Chicago. The band, which once played 20 shows at The Fillmore in San Francisco, will perform at the intimate 1,400-capacity venue while they’re in town to film the PBS show "Soundstage."

In a weird twist, Ozzy and Metallica have essentially traded bass players because the musician Newsted replaces left Ozzy's band to fill an empty spot in Metallica. Robert Trujillo played his last show with Ozzy on Friday.

At Friday's farewell bash for Trujillo at the Hard Rock Hotel in Las Vegas, Sharon Osbourne had to be rushed to the hospital. Her spokeswoman tells The New York Post that Sharon was overcome by heat exhaustion and felt faint while watching Ozzy's show.

Sharon was in the hospital for about 20 minutes before she was released. "It was nothing serious," the spokeswoman says.

While Osbourne's band is adding people, the Ozzfest has lost an act.

TRUSTcompany was slated to play the main stage, but instead it will return to the studio to record its second album. No replacement has yet been announced.

Meanwhile, Osbourne has confirmed an eight-date Canadian tour before Ozzfest, beginning June 1 in Vancouver and wrapping up June 16 in Quebec City, Quebec.

White Stripes drummer Meg White has reportedly broken her wrist after slipping on ice in New York knocking out the entire March itinerary. The duo had planned some promotional appearances in the United States for their new album, Elephant. European and American April dates are still on the itinerary.

MOORESVILLE, N.C. (AP) — Hootie & The Blowfish and The Goo Goo Dolls joined the lineup for the inaugural Dale Earnhardt Tribute Concert, a charity event being put on by Earnhardt's widow, Teresa.

Sheryl Crow, Kenny Chesney, Brooks and Dunn, and Alabama have also signed up for the June 28 concert at Daytona International Speedway. This will be the first nonracing event at the track.

Earnhardt appeared in a Brooks and Dunn video before his death. His son, Dale Earnhardt Jr., has starred in one of Crow's videos, and she and Hootie frontman Darius Rucker have made frequent appearances at NASCAR races.

Proceeds will benefit the Dale Earnhardt Legacy Program, which will donate money to children's, wildlife and educational programs.

ZZ Top will tour with Ted Nugent and Kenny Wayne Shepard with Double Trouble under the banner "Beer Drinkers and Hell Raisers" kicking off April 25 at the Century Tel Center in Bossier, LA. The 32-date tour winds down June 14 at the American Airlines Arena in Dallas. The tour will be co-produced by Clear Channel Entertainment and Beaver Productions, Top's longtime promoter.

Ringo Starr to Hit Road for Eighth All Starr Tour

The eighth Ringo Starr and His All Starr tour kicks off at the Casino Rama in Toronto on June 24-25 and winds down at the Greek Theater in Los Angeles on September 6 with 15 concerts already booked. Starr will rehearse for two weeks at the Orillia, Ont. venue.

Ringo Starr and His AllStarr itinerary:

Lisa Marie Presley's debut, in promotion of her first album's impending release, was before 1,000 enthusiastic record label executives and music sellers at the National Association of Recording Merchandisers' annual convention.

But it was difficult for the audience to hear Presley's voice above her backing band.

"She's a little shy, but she's new. Give her six months, and she's going to get much more comfortable," said Alan Josef Kaplan, with the music production company Music Universe.

Kaplan added that Presley has "star presence," and "you can see (mother) Priscilla and Elvis both in her."

Although her quiet voice may have been a technical problem, convention attendees surmised that Presley's label, Capitol, is hiding her behind the music as she starts her career. It was also difficult to hear her voice in the video for the single "Lights Out," which was shown at the convention.

Presley was visibly nervous during her first song, saying, "This is our first real applause ever."

By the second song, she was relaxed, smiling and joking around with band members. During her third song, she showed some attitude and stage presence.

Presley, dressed semi-casually in black slacks, black shirt and orange T-shirt, was kept away from attendees and the media. She was ushered out immediately after her three-song set.

Although comparisons to her father will likely be made, Presley's voice is completely unique, a hint of country mixed in with rock. Some attendees couldn't figure out Presley's genre of music, but agreed that it could fit into both rock and pop categories.

Even Capitol president Andy Slater said when he first heard about Presley singing, he was skeptical.

"Is it another celebrity trying to be a rock star?" he said at the time.

However, Slater said she is "tough and passionate about her music" and "radiates that thing that says, 'she's a star.'"

Said Jim Donio, executive vice president of NARM: "She is a celebrity, but now they see that she is a singer and a songwriter. She was very well received."

Presley's album, "To Whom It May Concern," will be released April 8.

For the third time, House of Blues and Volkswagen of America are teaming up for a concert series. The eight-city "Radiovw.com presents Keb' Mo'" tour begins April 4 in Orlando.

"Both Volkswagen and House of Blues recognized the value in facilitating a strong connection between music and consumers and have found the concept of the "VW Tours House of Blues" a viable and valuable partnership," said Tesa Aragones, Director of eBusiness for Volkswagen.

VW car owners who visit House of Blues can take advantage of the Perks
Program – a special program that offers discounts to people who have the VW
Club card.

Mavericks Reunite After Three Years For Album and Tour

The Mavericks–Raul Malo, Robert Reynolds, and Paul Deakin–have reunited after a three-year layoff. They will perform on May 2 at Nashville River Stages, one of only a few public performances before launching a world tour in the fall. The tour will be in support of The Mavericks' next studio album (their first in six years) which the band plans to record in the coming months. The album is scheduled for a September release on their new label Sanctuary Records.

Deakin toured with David Mead, and with Reynolds and Jerry Dale McFadden formed the band Swag, releasing an album, Catch All. While all found success in their individual creative outlets, after several years each found himself feeling a bit of a "Mavericks void" that was too compelling to ignore. Malo realized that several of the new songs he had written had that distinct, undeniable Mavericks flavor which led to him reaching out to Reynolds and Deakin with the notion of reforming the band. Reynolds and Deakin responded favorably and The Mavericks were reborn.

Stuart will be the headline performer at the grand opening black tie gala for the University of Mississippi's new Center for the Performing Arts in Oxford.

Also appearing at the March 28 event will be other native Mississippi natives, including Morgan Freeman, Gary Collins, Mary Ann Mobley and Delta Burke.

Stuart is also laying down tracks for his upcoming album. His spokeswoman says he spent Monday in the studio with Earl Scruggs and Uncle Josh Graves, recording their parts for the song "Tip Your Hat."

Meanwhile, Rascal Flatts is the first feature act to be announced for this year's Kansas State Fair, and they'll be headlining. The trio will be the main event at the grandstand show on Sept. 13. Phil Vassar will open.

The fair's general manager says Rascal Flatts was the band everybody was coming to see, so the fair's producers ponied up almost 10 percent of their entire entertainment budget to land them.

Minnelli's visit to the Caron Foundation, set in a former resort hotel in bucolic Wernersville, is routine, Warren Cowan & Associates said in a written statement.

"Liza Minnelli is currently doing her annual self-help program at the Caron Foundation which she does eight weeks out of the year as part of her recovery," the firm said. "She is fine and she will continue her concert tour and all of her commitments as promised. She is in great condition."

Minnelli has spoken openly about being addicted to alcohol and painkillers and about her past stints in rehabilitation programs.

The 57-year-old singer and actress last week canceled a party that she and husband David Gest had planned for April 15 to celebrate their anniversary. The couple said the timing of the bash was inappropriate because of the war with Iraq. Around 1,200 people had been expected to attend.

You just can't fight mother nature. Colorado's severe winter storm, forced the cancellation of Cher's March 17 concert at Denver's Pepsi Center where there was a power failure. Electricity was out for a half-hour. Although the Pepsi Center had a backup power source, Cher's big productions needed more juice than the backup could provide.