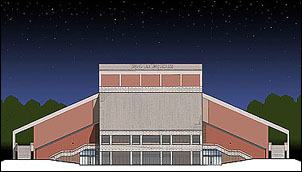 Gaylord Entertainment Company plans to invest over $7 million dollars to renovate the
Grand Ole Opry House. The renovations, which began earlier this month and will be completed by October, will not impact the Opry's schedule.

"Nashville and country music go hand-in-hand, and we want to ensure we
continue to attract the many country music fans and visitors to see the
best country music performers in America," said Colin Reed, president
and CEO of Gaylord Entertainment. "By making this sizeable investment
in this world-renowned facility, our Company is making certain that the
experience of going to the Grand Ole Opry is the best possible for our
customers, as well as providing an outstanding environment in which the
artists perform their great music."

The renovations will include two sizable additions that will frame the
original building, and will contain a 2,400-square-foot gift shop, a
2,000-square-foot box office, and public restrooms for the Opry Plaza.
Internal enhancements will include new concessions areas, upgraded and
expanded restroom facilities, and a new elevator. The House lobby and
other public access areas will also be updated with new lighting and
enhanced décor that accentuate the existing character of the Opry House.

"Gaylord Entertainment's investment in this renovation project
underscores its ongoing commitment to grow the impact of the Grand Ole
Opry brand and to serve our customers
better," senior vice president of Media and Entertainment Steve Buchanan
said. "The dramatically improved retail location will allow us to
showcase Opry products like never before, while additions including an
elevator, a new box office within the Opry House and more restrooms will
enhance our visitors' convenience and overall experience."

The renovations will also include enhancements to the Opry House's
production capabilities, including a new front-of-house audio system, an
automated mixing console and an acoustical treatment of the theater. "A
key priority of the Opry is to provide a superior production experience
for the artists who perform on stage as well as the audiences who visit
our venue," said Pete Fisher, Opry vice president and general manager.
"These upgrades will complement other recent production enhancements,
including a new projection system and enhanced stage lighting."

Tuck Hinton Architects from Nashville has been secured to
design and implement both the exterior additions and internal enhancements.

Hillside Productions, Inc., has won a pivotal ruling in its Federal Court case against the City of Sterling Heights, City Manager Steve Duchane, and the City's attorneys in staging a 2003 concert season at the 7,000-capacity Freedom Hill Amphitheater.

Judge Nancy Edmunds stated in her opinion, "Rarely does one hear such compelling and unrebutted evidence of the vindictive retaliatory action such as that taken by Defendant Duchane and the City of Sterling Heights. The facts in this case establish a relentless pattern of harassment and vindictiveness, starting with the ratcheting up of demands in 2001, the unjustified administrative enforcement hearing and nuisance determination which had to be vacated by the State Circuit Court, the denial of the special liquor license for the 2002 season, the search for irregularities of 'false representations' in the Hillside's documentation for alleged noise and invoice violations and the deliberate distortion of the terms and conditions of the SALU itself and the terms of the settlement of previous litigation in this Court.

"Every time Hillside attempted to protect its operations, the City turned the pressure up higher," she continued. "It is clear that some residents of Sterling Heights were unhappy about Hillside's operation and were vocal about it. It is obvious that Hillside's operation was a thorn in the side of the City Manager. And, it is equally clear and obvious that Plaintiffs are likely to succeed on their claims that the City engaged in selective enforcement and vindictive retaliation."

Hillside had asked the Federal Court for injunctive relief from the December 16, 2002, Sterling Heights Planning Commission vote revoking Hillside's Special Approval Land Use. In granting the injunction, Judge Edmunds also determined that not only did the City deny Hillside its constitutional rights of due process at the Planning Commission proceedings, but further; "Based on the pervasive evidence of harassment and retaliation by Defendant Duchane and the City, Defendants are enjoined from unlawful interference with any of Plaintiffs' other businesses."

Hillside has alleged in that lawsuit that after it filed a State Court action against the City in August 2001, to enforce and protect its rights under the Special Approval Land Use, the City Manager Steve Duchane, City attorneys, and other members of the City Administration unlawfully embarked on a plan to put Hillside out of business. Hillside alleges that the City's request to the Planning Commission for revocation of Hillside's Special Approval Land Use was just the final step in the pattern of harassment and retaliatory conduct. During last week's Federal Court proceeding, the City produced nothing to contradict, or even respond to testimony elicited by Hillside from both current and former City officials, which appears to support Hillside's allegations.

Judge Edmunds further stated, "if the homeowners are upset about the operations of the Freedom Hill Amphitheater, they should be upset with City Manager Steve Duchane, not Hillside." The Judge also observed that the City's actions in attempting to revoke Hillside's Special Approval Land Use for not paying some objectionable invoices was like "taking a sledge hammer to an ant."

Hank Riberas, spokesman for Hillside Productions, stated, "based on the testimony elicited in the State and Federal Court cases, the City Manager Steve Duchane, and other City officials could be held personally liable for damages to Hillside as a result of their behavior. We remain hopeful that the Federal Court decision will send a stern and clear message that Hillside's charges are much more than a 'mythical show,' as described by City Manager Steve Duchane, and that rogue, unlawful behavior on the part of governmental officials will not be tolerated."

Riberas further asserted, "We feel the testimony before the Court confirmed our allegations that the City Manager, City Administration and others did, in fact, conspire to injure and destroy Hillside Productions and the Freedom Hill Amphitheater. We are confident that the taxpayers of the City of Sterling Heights will ultimately demand accountability for these wrongful and unlawful actions on the part of their City leaders."

The construction of a new $20 million amphitheater is under consideration by Hershey Entertainment and Resorts Co. (HERCO) that would replace Hersheypark Stadium as its prime summer concert venue in East Hanover Township, PA.

At a February 25 East Hanover Township Planning Commission meeting, HERCO proposed a venue that would have 7,000-10,000 covered seats and 25,000 lawn seats.

HERCO's Garret Galia said the new concert venue be provide better seating and sound than currently at Hersheypark Stadium. "Hersheypark Stadium wasn't built specifically for performing arts," he told the Hershey Chronicle. "The amphitheater isn't an item on our long-range plan. As we look at options, if there is
something that makes sense for us as a company, then we'll pursue it."

HERCO will make an identical proposal on April 15 to the East Hanover Township Supervisors Board. Planning Commission chairman Larry McCarter said he expects HERCO will make another, more detailed presentation in the
future.

St. Louis University has decided to build an 12,000-13,000 capacity, $80 million-plus arena near its campus that would be more than just a new home for Billikens basketball and other student-related events. With a flexible floor plan, the new arena would compete with Savvis Center downtown, where the Billikens play now, which has half as many seats.

"We will be able to accommodate just about anything that goes to Savvis now, except that we won't have permanent ice," Kathleen Brady, the university's vice president for facilities and civic affairs, told the St. Louis Post Dispatch. The new area will also be home to concerts, family and trade shows and other community events.

"This will be a major venue in the St. Louis community that will primarily serve SLU's needs, but it will also be used by other groups that want to sponsor music or entertainment events," said former Mayor Vincent C. Schoemehl, Jr.

No Injuries After Small Fire In Vegas Casino Theater

LAS VEGAS (AP) – A small fire broke out at the end of a show at a Las Vegas Strip hotel-casino, but nobody was injured, authorities said Friday.

The fire broke out shortly after 10 p.m. Thursday in the Le Theatre des Arts at the Paris Las Vegas, officials said.

He said heat from stage lights sparked the fire, and employees used fire hoses and extinguishers to put out the flames before firefighters arrived. Damage was estimated at $100,000.

The fire came at the end of a show by entertainer Andre-Philippe Gagnon. A performance by singers Lou Rawls and Nancy Wilson remained on schedule for Friday.