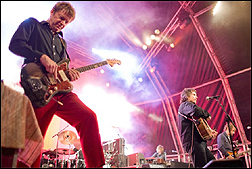 CHICAGO (CelebrityAccess MediaWire) — UK fans of Alt rockers Wilco are in for some bad news as the band has announced that the UK portion of their upcoming November tour is a no-go.

A post on the band's website said "We are sorry to announce that due to a scheduling conflict we’ve had to cancel the UK portion of the November tour. The dates in Belgium, Spain and Ireland are NOT affected and will go on as scheduled. We regret any inconvenience this causes and hope to schedule new UK dates soon. In the meantime, individual promoters/venues will have refund information."

The Chicago-based Wilco is touring in support of their latest release, Sky Blue Sky, which debuted at #4 on Billboard and got positive nods from the music press. – CelebrityAccess Staff Writers