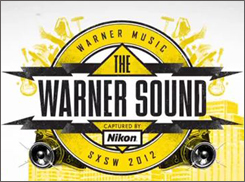 LOS ANGELES (CelebrityAccess MediaWire) — Warner Music Group has joined the likes of Pitchfork Media, Fuse and Bonnaroo in launching a dedicated YouTube channel that will feature exclusive new content from the label group.

Other content will include a film series by Cee-Lo Green dubbed ManTazia, as well as a documentary series by Michael Rapaport, the man behind the Tribe Called Quest documentary "Beats."

The channel will also carry "The Live Room," a series of live, "intimate" performances by WMG artists, including B.o.B. and Regina Spektor.

According to Variety, Ocean MacAdams, who had previous toiled as senior VP of programming at Current TV, has been named as GM of the Warner Sound and will oversee programming. Phil Botti, formerly Vice President of video content at Atlantic Records will serve in the role of exec. producer for the channel.

WMG chairman-CEO of recorded music Lyor Cohen said, "The Warner Sound will be a unique opportunity for artists to further their creativity, excite their fans and diversify their careers. Collaborating with an array of talent from across our labels, we will produce highly original music programming and digital entertainment." – CelebrityAccess Staff Writers