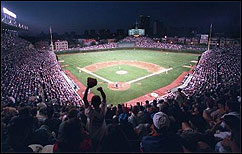 CHICAGO (CelebrityAccess MediaWire) — The Chicago Cubs have applied for a permit to install a less-obtrusive and removable, but permanent, version of safety nets at 91-year-old Wrigley Field that shielded fans from falling concrete all last season, according to the Chicago Sun-Times.

Team officials are prepared to spend anywhere from $500,000 to $1 million for the project, which will include a sophisticated netting system that “closer to the skin of the concrete” and matches its color.

The “debris liners” will be installed in portions of the concourse areas, above the ramps that lead to the upper deck, and at “a couple of entranceways” leading to the lower boxes, city Buildings Department spokesman Peter Scales told the paper.

“We applaud the Cubs for taking an extra step. We don’t believe that netting is a long-term solution to the problem, but we think it’s a good interim measure,” Scales added. He said he expects the permit to be issued in time for the installation to be complete by opening day of the baseball season.

Along with the nets, a Chicago landmark panel has approved plans to renovate and expand the park. The commission of Chicago Landmarks voted to back the Cubs’ plan to add 1,790 bleacher seats to Wrigley, and build a nearby parking garage. The team hopes to begin the expansion project following this season, and have it completed in time for next. –by CelebrityAccess Staff Writers