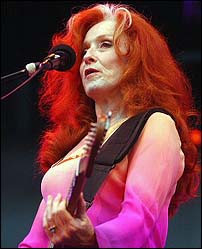 (CelebrityAccess MediaWire) — XM Satellite Radio is debuted its exclusive, original music programs for the fall on September 12 at 8 PM ET with the groundbreaking, one-on-one interview and performance series "Artist Confidential," this week featuring nine-time Grammy-winner Bonnie Raitt. In the coming weeks Tom Petty, Snoop Dogg, Quincy Jones and many others will deliver exclusive, original XM shows on a variety of XM channels.

"XM's new exclusive music series again demonstrates why XM has been called the 'HBO of satellite radio,'" said XM Satellite Radio president and CEO Hugh Panero. "It's an honor to be collaborating with this remarkable group of artists whose participation has allowed us to further enhance our critically- acclaimed commercial-free music lineup. These compelling original programs will give our listeners a musical experience far beyond any other radio offering."

Highlights of the fall season include:

Hosted by XM program director and on-air host George Taylor Morris, Artist Confidential offers intimate conversations with musicians, who will reveal rare insights on their lives and art, and live performances before an audience of fans and friends at XM's state-of-the-art Performance Theater in Washington, DC. As with all XM music programming, each episode is broadcast without commercial interruption.


THEN … AGAIN … LIVE!: (premieres September 19 at 8 PM with a new episode airing on the third Sunday of each month): XM has selected some of the most acclaimed albums of all time and invited the original artist to recreate their masterpiece live — in sequence, before an audience of fans — from today's vantage point, and with the benefit of 21st century technology. These stunning new renditions of albums that are musical touchstones to entire generations of fans include Cheap Trick's At Budokan, The Allman Brothers' Eat A Peach, Jethro Tull's Aqualung, and Lynyrd Skynyrd's Pronounced Leh-Nerd Skin-Nerd. Each XM presentation of an historic reliving of a legendary album is inter-cut with the artist's personal observations on their landmark work.

FROM BE BOP TO HIP-HOP WITH QUINCY JONES: (premieres on September 19 at 7 PM ET with new episodes airing each Sunday): For the first time in a broadcast forum, Jonesa has agreed to share his wisdom, his passion and many personal stories from his stellar career. Conceived, written and hosted by "Q" himself, XM's From Be Bop To Hip Hop With Quincy Jones walks listeners through the timeline of contemporary music from Quincy's unique perspective, voiced in his own eloquent words. Brimming with style, substance and soul, it's a rarefied journey.

WELCOME TO DA CHURCH WITH BIG SNOOP DOGG: (premieres in October): This broadcast will feature Snoop Dogg dropping tracks, previewing cuts, and welcoming friends to the XM airwaves direct from his own L.A. crib. Snoop Dogg hosts and calls all the shots on this monthly 90-minute music marathon.

TOM PETTY'S BURIED TREASURES: (premieres this fall): Tom Petty is XM Radio's raconteur and on-host, and each month from his L.A. home, Petty will pull together a jour set of little known musical delights and classic tracks alike — many vintage, each a treasure.

SHORTLIST MUSIC PRIZE: (premieres on September 17 at 10 PM ET): In a partnership based on a shared passion for quality new music and a desire to provide greater exposure to under-appreciated artists, XM is teaming with the critically-acclaimed Shortlist Organization to sponsor its 2004 Prize. The program will feature the music of the nominees and exclusive live tracks and interviews. XM's Shortlist programming culminates in November with the exclusive, live broadcast from Los Angeles' historic Wiltern Theatre of the 2004 Awards concert featuring Shortlist nominees and special guests. Past recipients of the Shortlist Prize include N.E.R.D., Sigur Ros and last year's winner, Damien Rice. The 2004 prize will include a $10,000 check sponsored by XM and a future program broadcast on XM dedicated to showcasing the winner. –Jane Cohen and Bob Grossweiner