ARLINGTON (CelebrityAccess) – Stand Together, an initiative that tackles the root causes of our country’s biggest problems, announced it will be the only Social Impact Partner and one of eight founding partners of the new Oak View Group (OVG) owned and operated Acrisure Arena, and the Coachella Valley Firebirds, the new AHL team is making their debut in October 2022. Stand Alone will also be the Music Series Title Sponsor for the new arena, set to open in December 2022. 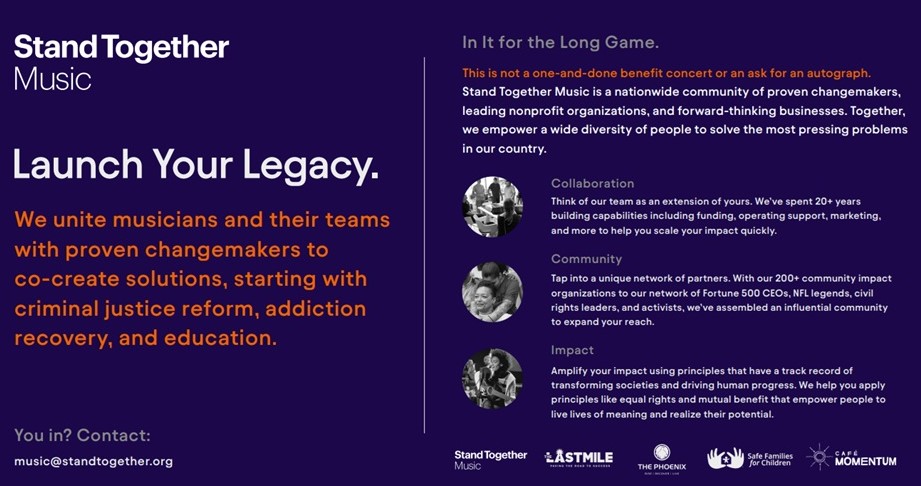 “Music brings people together. And musicians have been an essential part of the most important changes in our country – inspiring people to make progress on issues that otherwise seemed impossible,” said Brian Hooks, CEO of Stand Together. “Music has always been a bridge to a better tomorrow. It’s hard to think of movements for change without the songs that inspired and sustained them. That’s why Stand Together is committed to partnering with musicians and the country’s most effective changemakers to tackle the root causes of our society’s biggest challenges. We’re excited to be taking this important step forward with Acrisure Arena.”

Acrisure will be the first in the greater Palm Springs arena. It is expected to attract over one million visitors annually, bringing year-round entertainment to the area with sports, music, and family events. The arena is also in partnership with Live Nation. It will provide a rehearsal space for artists launching major tours, provide a new routing model that will service West Coast music needs, and plan to be a significant destination for artist residencies.

Acrisure will be home to the AHL team, the Coachella Valley Firebirds, with an adjoining community gathering space and training center for the team.

This will be the third wholly owned and operated arena for Oak View Group. The remaining founding partners are Verizon, Alaska Airlines, and Spotlight 29 Casino to date.