LONDON (CelebrityAccess) – The iconic Swedish pop group ABBA returned to the stage in a presentation of their album Voyage as digital versions of themselves … The ABBAtars.

The ABBA Voyage show premiered Friday (May 27) in London at a purpose-built arena. It boasted attendees such as Kylie Minogue, Keira Knightley, Swedish King Carl XVI Gustaf, his wife Silvia (a “REAL” Dancing Queen), and Zara Larsson, among others.

However, the show’s stars were ABBA themselves – Frida, Agnetha, Björn, and Benny, appearing together for the first time in 14 years, enjoying the show as much as the audience. BBC reports that Benny stood and clapped during Dancing Queen while Frida watched the entire show with a big smile on her face.

“Abba has never left us, in my heart,” singer Agnetha told the BBC on the red carpet. “It was not such a difficult decision [to reunite] because the music is part of us.”

The virtual doppelgangers for ABBA, known affectionately as the ABBAtars, made the 70-plus-year-old members of the band look as if a time machine had taken them back to the 1970s, at the very peak of their fame. The concert has been planned since 2016 and features breaking new technology that producer Baillie Walsh says are “not 3D holograms” but avatars recreated by hundreds of visual effect artists and animators. To create the realistic avatars, the band performed in motion capture suits (green or black colored suits that look like they’re adorned with light bulbs) for five weeks, with 160 cameras scanning their body and facial movements.

The avatars or characters appear on a 65 million pixel screen with lights and other special effects blurring the boundaries between digital and real. The images are 2D, but the lighting effects and back projections create the illusion that the band is in the room with you. Stationary at center stage, however, a floor-to-ceiling lights show adds a dynamic to the front where it appears they can move from their static positions. 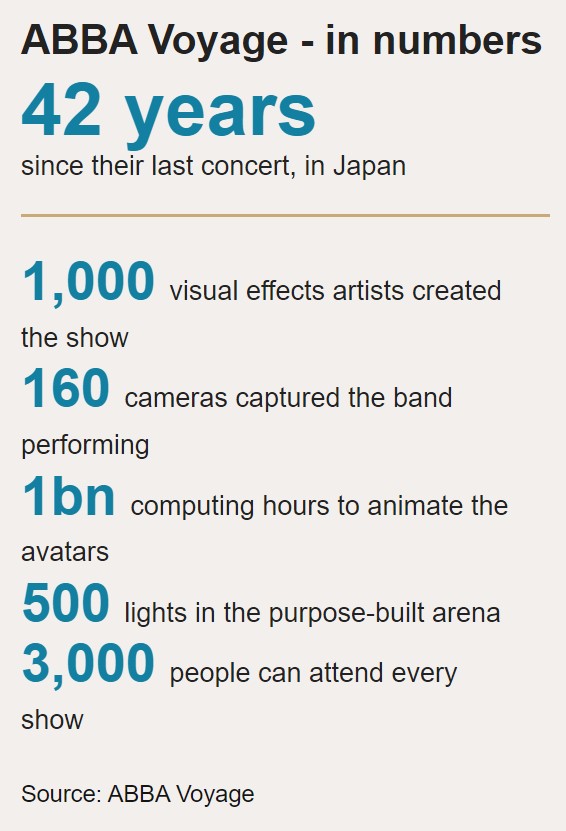 The show is both virtual and live as there is a 10-piece live band, who play through song after song from ABBA’s catalog with classics like “Mamma Mia’ and “Dancing Queen” mixed in with lesser-known songs like “Eagle” and ABBA’s two new songs (released in 2021), “Don’t Shut Me Down” and “I Still Have Faith in You” as part of the show.

The show is scheduled to run until December 2022. After that, the venue can be collapsed into a flat traveling pack and taken on the road. Benny, Bjorn, Frida, and Agnetha took a curtain call at the very end to explosive applause from the audience. They didn’t speak while taking center stage but didn’t have to – the show had already said it all.