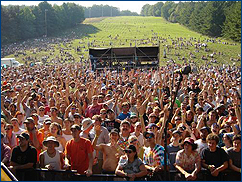 According to the Watertown Daily Times, an investigator with the state's narcotics enforcement team reported confiscating LSD, powder cocaine, crack cocaine, nitrous oxide, hallucinogenic mushrooms, Ecstasy, heroin, marijuana and various prescription drugs along with $4,000 in cash. Police estimate that the cost of their enforcement over the course of the weekend fest at $40,000.

"I certainly do welcome the people to come in and enjoy themselves, but they got to do it lawfully and legally and if they don't, they have no right to expect that they're gonna be exempt for any reason," Lewis County Sheriff Michael Tabolt told News10.

A further tragedy occurred at the event when a 37-year-old Utica man died suddenly. A preliminary examination did was not able to determine the cause of death and a final determination is pending on toxicology reports, the Daily Times reported.

This was the 9th annual installment of the popular festival, held annually at the Snow Ridge Ski Area in Turin, New York. The three-day camper runs over the course of Labor Day weekend. This year saw performances from the event's host, moe., Levon Helm, The Yonder Mountain String Band, Presidents of the United States of America, Fishbone and others. – CelebrityAccess Staff Writer