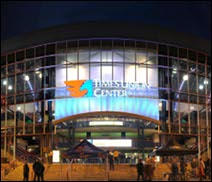 “SMG was renewed for another ten year contract to manage the Times Union Center in Albany, NY. SMG has worked closely with Albany County to invest $1.6 million dollars in new improvements to the arena, which has greatly enhanced the fan experience," said Bob Belber, SMG Regional General Manager.

"The building looks like it is new due to continued maintenance and continual upgradesm," continued Belber according to the press release.

Recent improvements include the construction of a new sports bar, replacement of lower level seating, replacement of telescopic landing seating and exterior lighting and sound enhancements.

Other notable changes are the additions of a center hung, digital LED scoreboard and LED ribbon boards running along each side of the inner bowl fascia as well as rotating around the bottom of the scoreboard. Additionally, luminescent LED track lighting, an outdoor audio system and a brand new backlit sign at the front entrance were added to the arena.