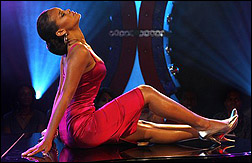 BRIDGEVIEW, IL (CelebrityAccess MediaWire) — A Burbank mother, who brought her 12-year-old daughter and friends to Toyota park for the the B96 Summerslam is expressing outrage at the contents of an adult-oriented goodie bag distributed at the event.

39-year-old Pam Richard took her family (Heather, 12, Crystal, 14, and Hola, 18,) to the concert, featuring teen-friendly pop queen Hilary Duff along with the earthier Akon and Rihanna as part of Celebration for daughter Crystal's graduation from the 8th grade, the Chicago Sun-Times reported.

The family hadn't been there for long when things took a turn for the mature. "The dancers were handing out CDs, so I went to the front to get one for Heather," Pam told the Sun-Times. Instead of the CD, the dancer reportedly handed Pam a bag, that upon opening she was shocked to discover that it contained items geared towards adults – condoms, joke sex coupons, "bearly legal" suntan oil satchets with marijuana leaves emblazoned upon them, an explicit CD entitled "Vagina" and an adult store catalog among other things.

"I am disgusted they would promote sex and drugs to a 12-year-old," Richard told the Sun-Times.

The bags were provided by promotion company Mixmaster Throwdown, a firm that generally caters to nightclubs. Dan Morrell, director of Mixmaster Throwdown asserted that the bags were distributed in error when staff members mistakenly distributed the wrong bags at the event. The correct bags should have contained t-shirts and dance music CDs, according to Morrell. "As a single father, it makes me sick to think that those bags can get into the hands of a 12-year-old," Morrell told the Sun-Times, in reference to his firm's product.

Morrell apologized to the family and B96, the radio station which sponsored the event. B96's manager Peter Bowen, expressed the requisite amount of contrition, telling the Sun-Times that he was "looking into it."

Perhaps inexplicably, Pam Richard did not seem to object to the blatantly mature themes embraced by several of the performers at the event, only the bag was inappropriate. Akon, known for his club hit "Smack That," a hook-laden celebration of casual club hook-ups, passed muster for consumption by pre-teens. – CelebrityAccess Staff Writers