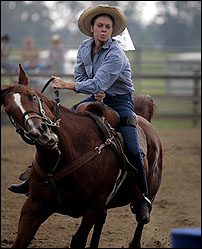 LOS ANGELES (CelebrityAccess MediaWire) — AEG has acquired an ownership interest in Grit Rock Rodeo, one of the world's leading producers of live and televised rodeo events, it was jointly announced by the organizations. AEG Events and Media, a live entertainment division of Los Angeles-based AEG, in partnership with Grit Rock Rodeo, will jointly own and operate the new venture, with the goal of expanding the number of events, television broadcasts and fans. Grit Rock Rodeo operates the Wrangler ProRodeo Tour and the World's Toughest Rodeo, which includes the World's Toughest Bulls & Broncs and Toughest Cowboy.

"AEG is very excited about rodeo-based events. They are among the most exciting and popular live events of their kind on tour today," said Eric Stevens, President, AEG Events and Media. "We believe that in collaboration, our organizations can further enhance the creative presentation of the live event and television production while expanding the appeal of rodeos to a wider demographic of fans. Capitalizing on the expertise and resources of AEG, we are committed to growing the sport across a variety of platforms."

"We are very pleased to create a strategic partnership with a brand and organization such as AEG that is so respected in the entertainment and music business throughout the world. Our partnership combines AEG's pre-eminence and innovation in live entertainment and music with the potential for tremendous growth in the sport of rodeo," said Jac Sperling, Chairman and CEO of Grit Rock Rodeo. "There are 30 million loyal rodeo fans throughout the United States, and that number is growing steadily. Our dynamic partnership will accelerate that growth to new fans and markets."