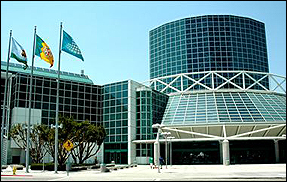 LOS ANGELES (CelebrityAccess MediaWire) –The Los Angeles City Council has voted to sell exclusive signage rights on the L.A. Convention center to AEG in a move that would allow "dozens" of traditional and digital billboards to adorn the facility which is located at the crux of one of LA's busiest intersections.

The deal, worth at least $2 million per year to the city also provides for the city to collect some of the net advertising profits generated by the signs, the LA Times reported.

The planned 50,000 square feet of signage includes two massive billboards which will cover the building's distinctive glass towers along with 4 digital billboards aimed at drivers on the the 10 Freeway and 110 Freeway interchange.

Council members told the Times that the deal seemed particularly attractive in light of the money, particularly as the city faces economic challenges in the currently troubled economy. Council members were also quick to point out that they only approved the business plan and not specifics about placement and size of potential signage.

Not everyone's thrilled about the plan, including one of the building's lead architects Ki Suh Park. Describing himself as "appalled" Park told the Times that signs on the glass towers would destroy the sense of transparency and the view of the distinctive structure.

Others, such as Councilman Bill Rosendahl believe that the city could have gotten a better deal from another company.

Rosendahl said he was worried that the deal was a taxpayer giveaway to AEG and said the city could possibly bring in more money if other companies were allowed to bid on a convention center signage contract. – CelebrityAccess Staff Writers