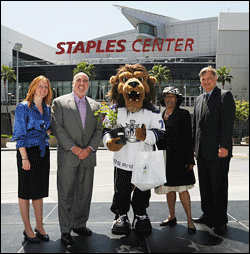 Zeidman also announced a local, Los Angeles partnership between Staples Center and Nokia Theatre L.A. Live, the City of Los Angeles and DWP that he predicted would set a new standard for energy saving measures that could be emulated by other private facilities and venues as Los Angeles continues to set an "energy-efficient" example for cities across the nation.

"Beginning today, every guest and every employee of an AEG-operated venue should have the satisfaction of knowing that they are entering a facility whose management is committed to setting an example and new standards for energy conservation and sustainability," Zeidman commented. "We take very seriously our obligation to take the lead in the introduction of these measures in our City and to lead the way in setting sustainability as a standard for Live entertainment.

Not only can we demonstrate that it is easy for businesses to adopt these critical new policies, we take great pride in our commitment to exceed the expectations of our guests and employees," Zeidman continued.

"I have had the pleasure of working with AEG, Staples Center, and Nokia Theatre L.A. Live and all of the great projects here in the 9th District in downtown Los Angeles, and I have to say that AEG is always striving to set the bar higher in everything they do and when it comes to green and sustainability they have really answered the call," Jan Perry, City of Los Angeles Councilwoman.

"Our friends at AEG have installed or replaced the typical 1.5 gallon waterless urinal with 250 water efficient urinals, and this is a part of DWP's extensive rebate program for businesses, home owners, and consumers, and are an efficient way to conserve water," Jim McDaniel, Senior Assistant General Manager for Water for LADWP commented.

As the home of five professional sports franchises and the host of high-profile events of national and international distinction, Staples Center fully recognizes and accepts its responsibility to help improve local economic, social and environmental conditions.

Since its opening in 1999, Staples Center continues to work to demonstrate commitment to giving back to the local community. The arena has introduced and maintained policies to efficiently manage resources while maintaining energy efficient systems. Throughout the last several years, Staples Center's management team has become increasingly aware of the environmental impact of operations and is committed to taking even more measures to reduce its footprint. As the 'Sports and Entertainment Center of the World,' Staples Center is committed to becoming a world-class "green" arena.

Staples Center's management team has compiled a list of environmentally important accomplishments and initiatives practiced at the venue and have introduced these policies at the adjacent Nokia Theatre L.A. Live when the company brought it "on-line" last October.

"We have invested numerous resources and time to consistently update our sustainability practices to ensure we are setting the bar for operating energy efficient and sustainable Live entertainment venues," Zeidman added.

Moving forward, AEG has established these two Los Angeles venues as examples for other company operated venues to use as minimal guidelines as they develop and put policies in place to set sustainability examples in their marketplaces. – CelebrityAccess Staff Writers