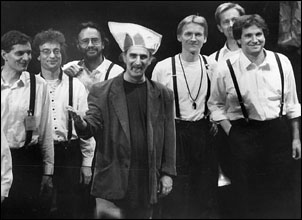 
These vintage mixes were culled from the Vault by Zappa Family Vaultmeister Joe Travers. At UMRK, Dweezil Zappa then constructed the sequence and produced the program now known as "QuAUDIOPHILIAc" for release.

"QuAUDIOPHILIAc" debuts previously unreleased performances, both live and from the studio, of compositions such as "Rollo" and "Venusian Time Bandits," and features experimental multi-channel recordings from Zappa's basement, as early as 1970. The DVD-A includes tracks from Sheik Yerbouti, Shut Up 'N Play Yer Guitar and Orchestral Favorites superbly mixed in surround. "QuAUDIOPHILIAc" is licensed in cooperation with the Zappa Family Trust and FZ's Barking Pumpkin label (http://www.zappa.com). DTS Entertainment previously released the first Zappa DVD-Audio release, Halloween, in 2003.

"From his quadrophonic releases in the early '70s, through the multi-channel theatrical mix of his 1979 film Baby Snakes, Frank Zappa was a passionate advocate for surround sound," said Jeff Skillen, Vice President of DTS Entertainment. "We are proud and excited to continue our relationship with the Zappa family, and to bring these incredible, ground-breaking recordings to the world. We hope that the release of 'QuAUDIOPHILIAc' will help raise awareness of the greatness, staying power and relevance of Frank Zappa's music, as well as give the public a thrilling new surround music experience."

Some of the features included in the "QuAUDIOPHILIAc" surround sound DVD-Audio disc are:


"Frank surrounded himself in music whenever and wherever possible," said Gail Zappa. "He was always pushing the envelope of what was possible given his available tools and inventive concepts gleaned from years of experimenting with all manner of the recording experience – from the type of microphone and its placement to the waveform of the mix itself. For him, anything was possible subject only to the budget and this idea extended well beyond the studio. The only place where this restriction could not deter him was in his imagination. Having said that, Dweezil is no slouch in the studio either."

"I am continuously intrigued by Frank's music and the way he composed and recorded it," said Dweezil Zappa. "Having the opportunity to hear some of my favorite songs that were formerly in stereo but now in surround is really exciting. As he explains in the liner notes, "QuAUDIOPHILIAc" is "an interludicrous journey that we could all experience together." –by CelebrityAccess Staff Writers