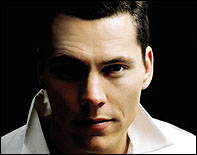 (CelebrityAccess MediaWire) — AM Only-represented artist Tiesto, twice voted the #1 DJ in the world by DJ Magazine, will make Olympic history on Friday, August 13, when he becomes the first DJ ever to perform in an Opening Ceremony of the Olympic Games.

Some four billion people will be watching the planet's premier sport event, when the 28th Olympiad of the modern era opens in Greece, the land where the Olympics were born, and the City where they were revived 108 years ago.

No DJ has ever performed at the Olympic Games.

The President of the ATHENS 2004 Organizing Committee, Mrs. Gianna Angelopoulos-Daskalaki, heralded the announcement of Tiesto's participation, saying: "Our Ceremonies will include unique Greek artistic elements along with modern and international perspectives. While it is path-breaking, it is also natural, that a modern artist like Tiesto will contribute to the celebration we're planning on our opening night. We welcome him to Athens."

In October 2003, Tiesto was approached by the Athens Organizing Committee for the Olympic Games (ATHOC) for a DJ-performance of 90 minutes during the parade of the athletes, a part of the Opening Ceremony of the Olympic Games.

During this parade, all participating nations introduce their athletes, over 10,000 in total. ATHOC has shown it values art and innovation by asking the most popular DJ on Earth to produce the music for the parade.

Tiesto will perform his DJ-set live in the Olympic Stadium in Athens. This will include new tracks produced especially for the Opening Ceremony and songs that have been tailored to compliment the spirit of the Ceremony.

In connection with this announcement, Tiesto said, "I am honored to be to be part of the biggest sports event in the world. The fact that the Games are returning to their birthplace and to the city where they were revived makes Athens 2004 very special. The opportunity to perform my music for billions of people around the globe will be the greatest highlight of my life." –by CelebrityAccess Staff Writers