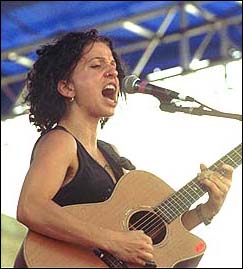 Politics and music do not always gel, particularly at the New Jersey Performing Arts Center in Newark. When Ani DiFranco performed at NJPAC on March 19, war was breaking out in Iraq.

DiFranco, well known for her social activism, launched her own "war" – a war of wills – and won out over NJPAC brass. The NJPAC forbid her to set up information tables with literature – the first time in her 12-year touring career that tabling was not allowed – and threatened to pull the plug on the concert if activist speakers with her spoke.

Well, the activists spoke and the power stayed on after DiFranco threatened to not perform.

On her Web site (www.righteousbabe.com), DiFranco pointed out the venue also refused to allow anti-war organization Not In Our Name’s (NION) literature and posters to be available at the Righteous Babe merchandising table, and recounted the evening’s event.

“Rather than argue,” said Scot Fisher, DiFranco’s manager, “we offered Miles Solay, the representative from Not In Our Name, the opportunity to address the audience from the stage.

But the venue's administrators threatened to pull the plug on the show if anyone other than DiFranco spoke advocating their cause, her site reported. Fisher discussed the situation with DiFranco who subsequently told the promoter (Clear Channel Entertainment), “If the venue stops the speakers from addressing the audience, DiFranco will not perform.”

Triumphantly, before DiFranco sang her first note, she introduced representatives of Not In Our Name and the leftist public-radio show "Democracy Now!" who spoke briefly, reported the Newark Star-Ledger.

Solay, who was joined by Amy Goodman, host of Pacifica Radio’s Democracy Now! program, and Jeremy Scahill, a journalist who had just returned for Baghdad, took the stage and voiced their resistance to the war, her site reported. Calling for action, the speakers also expressed outrage at the repression of free speech engaged in by the venue. In defiance, Scahill tossed handfuls of informational leaflets into the cheering crowd. DiFranco then performed her solo concert without interruption. Throughout the rest of the evening, repeated references to the incident were met with waves of loud approval from the audience.

Summing up the confrontation, DiFranco said: “In this time of war, when all major media sources are co-opted and controlled by the military-corporate monolith, it is especially important that we disobey any attempts to silence us. They tried to shut us down tonight, but once again we have proven that there is power in numbers. So it’s People – 1, Random Knuckleheads – 0 at the New Jersey Performing Arts Center.”

After the show, the literature was given out freely and DiFranco suggested that her fans fax copies of the Bill of Rights to the NJPAC.

The NJPAC issued the following statement:

"Ms. DiFranco's representatives requested in advance that political literature be placed on tables in the lobby. They were told, well over a week in advance of her engagement, that this was against NJPAC policy. When Ms. DiFranco advised NJPAC management that she intended to bring a representative of an advocacy group on stage to speak, she was again told this was against NJPAC policy and was requested not to do so.

"NJPAC has a responsibility to its ticket-buying patrons to present performances within prescribed artistic expectations, the statement continued. Ms. DiFranco was advised that if her performance evolved into an extended political event, NJPAC would consider intervening.

"Throughout history, the arts have often provided a powerful and legitimate forum for the expression of political ideas. Political commentary, whether through protest songs, dance or theater can be an integral component of art. NJPAC respects such freedom of expression and emphatically does not intend to censor its performers.

"However, when the political element dominates and alters the original artistic purpose, particularly when a performer invites onstage participation by a non-artistic third party, NJPAC reserves the right to preserve the intended artistic experience for its audiences."