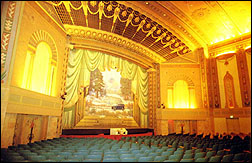 Two appeals have been filed in the Los Angeles Appellate Court by three non-profit organizations – Friends of the Raymond Theatre, Spirit of the Sage and FORECAST Foundation – who seek to stop the destruction and redevelopment of the historic Pasadena Raymond Theatre (also known as the Perkins Palace), and turn it into an apartment/retail complex.

The 82-year-old venue, originally a vaudeville and movie house, is listed as a landmark in the National Register of Historic Places. In latter years it has hosted such artists as Phil Collins, Bruce Sprinsteeen, Fleetwood Mac, Willie Nelson, and Tina Turner, among many others.

Friends of the Raymond Theatre and the Spirit of the Sage Council allege that the City of Pasadena has violated the California Environmental Quality Act, the City's General Plan, Specific Plan, Zoning Code and the Secretary Standards for Rehabilitation of Historic Structures when granting approval of the variances.

FORECAST Foundation alleges the City of Pasadena violated the Zoning Code and did not take into consideration during the permit process the facade and open space easement granted by Pasadena Heritage to theater owners Gene and Marilyn Buchanan that should protect the theater in perpetuity.

"The city permit blatantly failed the Raymond Theatre," says Gina Zamparelli, director of Friends of the Raymond Theatre. "This is an important landmark building that deserves a fair and honest trial. With a strong chance of prevailing on the appeal, we feel confident we made the right decision to take this matter to the appellate courts."

According to Robert Frampton, director of the FORECAST Foundation, "building a new theater of the Raymond's capacity would cost perhaps 10 times the purchase price of the Raymond, so economics favor the use of the Raymond as a multi-use venue."

The theater was sold in 1987 to developers, and since that time, a 15-year battle has ensued to thwart redevelopment of the site into an apartment/retail complex. To date, litigation has cost $114,000 in legal fees.