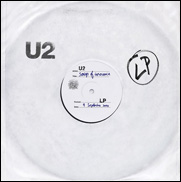 CUPERTINO CA (CelebrityAccess) — Apple's decision to automatically download U2's latest album to user's mobile devices has aroused the ire of some of their customers who were surprised to find the album popping up in their music shuffle.

The album in question, U2's "Songs of Innocence" was given away to more than 500 million iTunes users for free last Thursday as a part of Apple's promotional push for their iPhone 6 devices. However, despite Apple's largesse, some non-U2 fans took are complaining about the apparent intrusion of U2 into their carefully curated music collections.

"It's embarrassing for Apple that it's had a bit of a backlash," said Ian Maude from the media consultancy Enders Analysis. "It was giving something away to its customers – so that part was really good – but what it should have probably done was make it optional. Not everybody's a U2 fan as it's just discovered."

Even U2 frontman Bono acknowledged that their album might not be a welcome addition for all users.

"And for the people out there who have no interest in checking us out, look at it this way… the blood, sweat and tears of some Irish guys are in your junk mail."

Apple was quick to respond to the complaints though and the company has since released a downloadable tool to remove the album. – Staff Writers