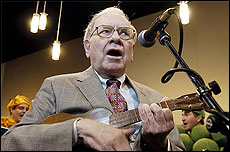 (CelebrityAccess MediaWire) — Most of Jimmy Buffett’s diehard Parrothead fans probably haven’t heard one of his shortest compositions – a 2-line ode to the stock of Berkshire Hathaway penned in 2003.

The singer, who is indeed a long-time Berkshire shareholder, has also been friends with Berkshire chairman and CEO Warren Buffett for more than 20 years. They don’t get to see each other often, but do talk on the phone regularly about business, they say. They’ve even performed music together. Tonight, they’ll be collaborating again at a New York charity dinner for Conservation International.

Besides sharing the name Buffett, both have long suspected that they share a common genetic history.

“Warren leaves messages for ‘Cousin Jimmy’ and always has,” the singing, and younger, Jimmy Buffett told The Wall Street Journal. “I’ll take it from him.” The singer refers to the financier “Uncle Warren.”

While no one knows for sure, Warren’s older sister, 77-year-old Doris Buffet has been attempting to find links to other Buffetts for more than 20 years.

“I’ve spend a lot of time and energy trying to connect up the two families,” she told the paper. She said she is even considering a DNA test at this point.

In the early 1980s, Doris sent letters to 116 other Buffetts around the United States, looking for information about her family’s history. One of the letter went to Jimmy Buffett’s office, which prompted him to contact her.

In 1983, Jimmy and Doris arranged a trip to Norfolk Island, a small speck of land in the Tasman Sea, between Australia and New Zealand, where there is a rather large population of Buffetts, supposedly the decendents of the men who had participated in the 1789 mutiny aboard the HMS Bounty.

While the singer and Ms. Buffett found a warm welcome among the Norfolk Buffetts, they found no evidence of family tied between either U.S. family and the island families.

Warren came to the opening of Jimmy Buffett’s Cheeseburger in Paradise restaurant in his hometown of Omaha, Nebraska, last May. Warren played ukulele and sang “Five Food Two, Eyes of Blues (Has Anybody Seen My Gal?)” at the event, and even bought the first cheeseburger.

Despite the shared musical and business interests, there is still no conclusive evidence to link the two big-name Buffets, but that won’t deter them.

“I do see some family resemblance,” Jimmy told the WSJ. He added that he has always “just kind of assumed” a family relation. –by CelebrityAccess Staff Writers

Springsteen's first new album in three years debuted at the top of the album charts, selling approximately 222,000 copies for the week ending Sunday, according to industry figures released Wednesday.

Mariah Carey remained at No. 2 with her comeback CD, "The Emancipation of Mimi." It sold 197,000 copies.

And "Nashville Star's" first winner, Buddy Jewell, moved 26,000 units to debut at No. 31 with his second album, "Times Like These."