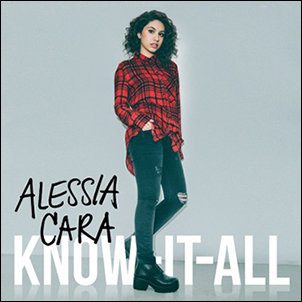 NEW YORK (CelebrityAccess) — Alessia Cara is equal parts fresh face, old soul, newcomer, and lifer. She's moving fast and now it's up to the rest of the world to catch up and catch on. Alessia Cara’s “Here” is the most viral song of 2015, according to Spotify. She has been at the top of most music charts such as Billboard and iTunes with her anti-pop pop song.

At 19, Canadian-Italian Alessia Cara is considered to be a new brand of pop star with a soulful bluesy voice that is beyond her years. She is riding the refrains of her ironic anthem, "Here." Premiered by The Fader, "Here" garnered over 500,000 total streams in its first week, resounding praise for its freshness and insight. The song has risen to its number one status, finding fans in Taylor Swift and found herself as one of Taylor’s guests on her ‘1989’ tour, a coveted spot for a rising new star to garner even more fans.

"Here" is unapologetically autobiographical: "'Here' is a true story," Alessia confesses. "It's a party song, but really it's the complete opposite of a party song. It's absolutely me; it shouts out the person in the corner of the party, looking around uncomfortably. I feel like this song narrates what the wallflower is thinking."

Co written by Sebastian Kole, "Here" manages to be both cheeky and cautionary. It's authored from the perspective of an unenthusiastic party-goer who's counting the minutes till it's time to leave. "Here" takes aim at mindless revelry and is peppered with lines that touch everyone's hidden introvert: "I'm sorry if I seem uninterested / Oh I'm not listenin', oh I'm indifferent / Truly I ain't got no business here" and "Excuse me if I seem a little unimpressed with this / An antisocial pessimist, but usually I don't mess with this" and "Really I would rather be at home all by myself / Not in this room with people who don't even care about my well being."

Powerful stuff from a teenage voice; in fact, that's powerful stuff from anyone who's ever put pen to pad in name of art. And Alessia's mature pen game is matched by her larger than life voice; she's dazzlingly chameleon like, boasting the kind of versatility that makes Rihanna such a force. In short, Alessia has cause to be confident. But she's still the bashful, small town girl even in the big city: "You don't think you're ever going to end up here from Brampton, Ontario, Canada. Instead, you think, 'Who's going to see me?' I can't wrap my head around everything that's happened: the chemistry with Sebastian, the producers, the label. Def Jam got what I am trying to do: I want my music to be cool and reflective of my influences — Drake, Amy Winehouse, Ed Sheeran — but still new. Def Jam gave me the opportunity to say something meaningful and positive without being preachy. I didn't expect everything to feel so natural and organic. And I can't believe how quickly it's going."

YouTube covers may have introduced Alessia Cara but she has now released her first studio album “Know-It-All.” Her songs written from her world to accurately depict the angst of teen life and dreams with a relatable but fresh sound and one can almost feel as if Cara is telling you personally her story than singing the typical eight beat pop song to the masses. Cara brings the reality of the teen years with her authentic presence making the listener grow and enjoy her uncomfortable angst and not dismiss her voice as complaint or complacency. Instead there is something endearing about this self-proclaimed “anti-social pessimist.”


Just this week Alessia has added tour dates to her already sold out 'Know-It-All' tour in progress. Venues such as New York City’s Webster Hall being just one venue that will likely follow Boston’s Brighton Music Hall and be a complete sellout. In Boston tickets for her show are already on resale ticket sites for almost four times face value. Her tour is finishing up in North America on February 4th in Dallas, Texas.