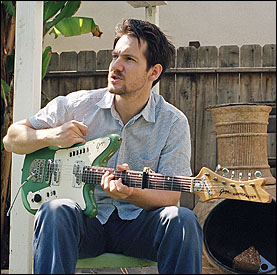 On Wednesday, September 17th in Phoenix, AZ, Mills will kick off a 13 city headlining U.S. tour. The Heigh Ho band will feature Rob Moose on violin, Stuart Johnson on drums, Tyler Chester on keys and Sebastian Steinberg on bass, among other frequent Mills collaborators. See below for the complete list of tour dates.

Heigh Ho was recorded in Los Angeles at the legendary Ocean Way studios in a room built for Frank Sinatra & used by everyone from Bob Dylan to Ray Charles. The self-produced album references a range of genres without really belonging to any. To that end, Mills asked several of his musical heroes – including Jim Keltner, Don Was, Jon Brion, Benmont Tench, Mike Elizondo, and Fiona Apple (who duets on the bucolic "Seven" and the debut single "Don't Tell Our Friends About Me") – to collaborate on what would become Heigh Ho. "The goals for Heigh Ho were songs, sonics, and capturing performance," Mills said.

Since quietly releasing his debut album, Break Mirrors, Mills' rise within the industry has been significant. Having most recently produced the sophomore album by the Alabama Shakes, Mills has also worked with ZZ Top's Billy Gibbons, Sara Watkins, Conor Oberst, Sky Ferreira, and Fiona Apple, with whom he toured extensively in 2013 and 2014.

As a session player and sideman he has worked with Beck, Cass McCombs, Jackson Brown, Lucinda Williams, Andrew Bird and Neil Diamond, among others. Rick Rubin and T Bone Burnett frequently call upon his services as a guitarist. Eric Clapton who recently told Rolling Stone magazine "Blake Mills is the last guitarist I heard that I thought was phenomenal."