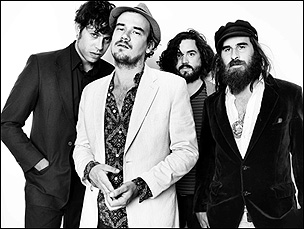 NASHVILLE, TN (AP) — Nashville's burgeoning rock 'n' roll music scene just got even better with the release of Clear Plastic Masks' "Being There."

The greasy, '70s rock-addled quartet got together in Brooklyn, New York, and came to Nashville, Tennessee, to record. They never left, signing with Kings of Leon label Serpents & Snakes Records and helping round out a music scene that's gotten a lot of attention in recent years.

"Being There" was produced by Alabama Shakes producer Andrija Tokic, and the album shares a lot of the hallmarks that helped make the Shakes a surprise breakout.

First, there's charismatic lead singer Andrew Katz, who like the Shakes' Brittany Howard, has a commanding stage presence, an interesting voice and an off-kilter point of view and songwriting sense that can appeal to many different listeners. And like the Shakes, Katz's backing band shares a powerful chemistry that's unusual in a group just on the scene.

The band has two modes: lounge and loud. Katz has a tendency to lean back and croon from time to time, sitting at the keyboard with a twinkling grin. But Clear Plastic Masks is at its best on songs like "Pegasus in Glue," ''Shakedown" and the film score-ready "Dos Cobras," tracks where Katz leans in and really joins with the band like a closed fist.

Those songs shake with power and promise — and might just open the door for another Nashville band.