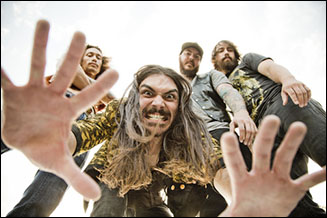 (CelebrityAccess) – Witnessing this band last in the Fall of 2015 on Motörhead's MotörBoat, the energy, showmanship and talent that put forward left quite and impression. Not to mention on the deck of the ship in some 90+degree temps.

Find photos captured by CelebrityAccess at this link: https://www.facebook.com/ConcertLifePix/photos/?tab=album&album–id=1151675291512602

In 1970, Hunter S. Thompson infamously campaigned to be elected Sheriff of Aspen.

“As far as the story goes, I thought it might be cool to write about a planet called Fat City,” explains Brandon. “It’s a place where all of the sleazeballs of the galaxy can go and be themselves without any regard for morals or anybody else’s well-being. On the last record, a lot of the themes were supernatural and took place on earth. This one goes intergalactic.”

Following the release of 2014’s Something Supernatural, Crobot tore up the road back on earth. They’d share bills with the likes of the legendary Motörhead, Anthrax, Volbeat, Clutch, The Sword, and more in addition to performing at festivals such as Download, Shiprocked, Motörhead's MotörBoat, Rock on the Range, Sturgis Motorcycle Rally, Graspop, and Rocklahoma, to name a few. Along the way, they landed coverage from Paste Magazine, Rolling Stone, Yahoo! Music, Revolver, and many others.

Towards the end of 2015, the boys began plotting their next move. During downtime with Motörhead, they carved out a week for pre-production with Machine (Lamb of God, Clutch, Gym Class Heroes) in Austin, TX, sowing the creative seeds.

“We actually had a unique opportunity to do some recording in late 2015,” recalls Paul. “We were in the Austin area where Machine lives, and he was available. We got a bunch of demos done in a short period of time. Typically, we have to lock ourselves in the jam room for a week between tours and hammer things out. We got a good jumpstart here.”

“We played so many shows since Something Supernatural came out,” adds Brandon. “Going into Welcome To Fat City, we knew what worked on stage and what didn’t from the last record. First and foremost, we boil down to a live band. If something doesn’t feel good up there, we push it aside. That helped pave the way for this new music.”

The guys would return to Austin in late January 2016 and properly commence work on the new tunes. Over the course of 5 or 6 weeks, depending on who you ask, they cut eleven tracks and blew up countless beer cans…

“Machine is super detail-oriented,” comments Bishop. “He puts the songs under a microscope and really helps us expand them. He brings the sheen to the production!”

“We did a lot of stuff with his flamethrower too,” chuckles Jake. “It helped pass the time. It’s like a portable death machine straight of Metalocolapsye!

“That set the tone, and it established the spectrum for what would become Welcome To Fat City,” admits Brandon. It’s heavier. It’s funkier. It’s bluesier. There are so many grooves and big moments. We’re maturing as songwriters and looking at things from a new perspective.”

The first single “Not For Sale” steamrolls with an aggressive energy that T-bones on a big, brash, and bombastic chant about, “standing up for yourself as a human being and not letting anyone take advantage of you,” as the vocalist puts it.

Meanwhile, “Hold On for Dear Life” seesaws amidst a rumbling groove and six-string squeals under a soulful hook. “I thought the chorus, Hold On For Dear Life Until I Get it Right was a cool philosophy,” says Brandon. “That one is along the lines of being galaxy pirates.”
Everything concludes on the stampeding crunch of “Plague of the Mammoths.” Hinging on an ominous bass line and swell of feedback, it emits a thundering send-off.

“That’s a metal riff,” smiles Bishop. “We were in Europe talking about how the mammoth became extinct. We thought it would be so awesome to have a song about it.”

Ultimately, Crobot carve out their own corner of the galaxy with Welcome to Fat City. You might never want to leave either…

“We write music we want to hear,” Brandon leaves off. “We want to have fun doing this. It’s what we live and breathe. That passion comes through.”

“When I discover a band I really like, I get inspired to play guitar or write something,” concludes Bishop. “I hope people feel the same way when they hear us.”