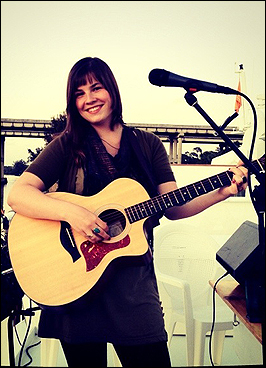 ANCHORAGE, AK (CelebrityAccess) – Singer-songwriter Emma Hill announces a November 11 release date for Denali, her new CD of all-original songs steeped in the great Americana/folk tradition, all powered by her melodic, crystal clear voice that conjures up the best of what the Alaskan frontier represents.

Based in Anchorage, Emma Hill and her musical partner Bryan Daste (pedal steel, banjo) have been recording and releasing albums together since 2007. Denali is their fifth full-length album to date, all released on her own indie record label, Kuskokwim Records. The new CD was co-produced by Emma and Bryan with Evan Phillips of Easton Stagger Phillips and The Whipsaws, was mastered by Jeff Lipton (Andrew Bird, Josh Ritter) and features many of Alaska’s finest musicians. Acclaimed Americana performer Tim Easton and his fiddle player, Megan Palmer, both make guest appearances on the album.

Hill and Daste, who’ve been compared in the past to Gillian Welch and David Rawlings, have steadily built a sustainable career over the last seven years, which includes a heavy touring schedule and lots of house concerts. The game plan for the supporting tour of Denali includes a healthy dose of dates in the lower 48 states during the fall, with clubs and showcase venues, as well as house concerts.

Emma Hill received excellent critical acclaim and radio airplay on her previous albums, including being featured on National Public Radio's “Morning Edition” and reaching #15 on the Euro Americana charts. “This new release is our strongest effort to date, and we are really ready to push it hard,” says Hill. “We are booking a 60 date fall/winter tour now, and we intend to work our butts off to make this record a success.”

Emma Hill grew up in Alaska, coming from the small village of Sleetmute, and later moved to Palmer to attend high school. In 2006, Hill moved to the thriving music scene in Portland, Oregon, to pursue her musical aspirations and to also continue her education. She met Bryan Daste in 2007 and the duo promptly began a musical collaboration that has continued for seven years, four previous albums and thousands of touring miles.

Hill and Daste bring their intimate lyrics to life with poignant harmonies, aided and abetted by lonesome pedal steel guitar, plus Hill’s honeyed voice and confident delivery. Critics have described their sound as ranging from folksy Americana to catchy alt-country. In a review, The Philadelphia Examiner said she possessed “the kind of voice that one can easily fall in love with.” A German reviewer described her as “a young woman with plenty of creative power;” and another reviewer described her sound as “homey vocals with heart.”

In the fall of 2011, Emma Hill moved back to Alaska and continued to perform throughout the state, as well as expanding her fan base regionally and nationally through constant touring. She stays busy performing as a solo act, as a duo with Daste, and in an expanded band format, depending on the tour needs. The one-on-one intimacy of house concerts is Hill’s specialty, where her signature sound and performances have made Emma an in-demand artist. Denali promises to be a healthy addition to an already impressive body of work.