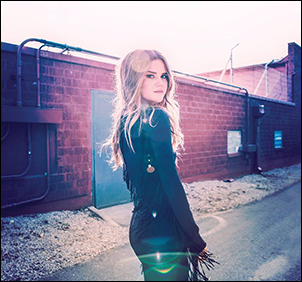 NASHVILLE (CelebrityAccess) — “Can I get a hallelujah, can I get an amen?” sings Texas-born, Nashville-dwelling Maren Morris on “My Church,” the lead single from her self-titled LP. Though “sing,” however, might not be the most appropriate verbiage – she belts, more like it, in her dynamic range that can growl soulfully one moment and twangily howl the next. It’s an honest performance from an artist and writer who stands out for the singular point of view, sheer creativity and fearless approach to music she’s developed since she began performing and writing as a young child. Using the boldest colors from across many genres as her palate and country as her canvas, Morris’ stories are vivid paintings that can be gleefully fun, tearfully heartbreaking and a perfect balance of modern and timeless.

In the five songs of her EP, it’s easy to discover all of the diverse and dynamic sides that make up Maren Morris – from the confident, danceable swagger of “80s Mercedes,” to the island jam of “Drunk Girls Don’t Cry,” and the soulful confessions of “Wish I Was.” And, of course, the thrilling pop-country-gospel amalgam of “My Church,” a track that was written while Morris was cruising along in her car listening to the radio and had an epiphany: that here’s something downright spiritual to letting your body and mind be enveloped by the power of music.

“I realized, this is my version of church,” she says. “Right after I said it aloud I thought, ‘I should write that down’! Everyone has that feeling when they are in their car by themselves, listening to music with the windows down. I wanted to capture that in a three minute song – and it almost fell out of the sky.” It’s no coincidence that a track about letting music take you to church does just that with its infectious melody.

Morris was in Los Angeles with writing partner busbee when the idea was born, and the track was crafted in under an hour. “My Church” calls out some of Morris’ core influences – Johnny Cash, Hank Williams Sr. – but is composed as its own unique identity. There are twangy licks amongst a doo-wop beat, held together by her singular vocals. “I took a breath and I knew this was something really special,” Morris says. “It really embodied everything I represent as an artist and as a writer. And in life.”

And that’s someone who has been shaping her musical identity since she still had homework to do. Born in Texas, Morris would often dominate the karaoke machine when her parents, who owned a local hair salon, would throw parties – and she’d belt LeAnn Rimes and Patsy Cline to the bewilderment of guests. Her writing prowess began with stories and poems in school and blossomed into lyrics when her father bought her a guitar at age twelve – and she took to it instantly.


“I started playing all around Texas – any bar or club that would let me in there,” she says. “I was the only kid in school that had a job on the weekends!” The albums that shaped her early life were varied – like Patty Griffin, the Dixie Chicks, Sheryl Crow – but she also grasped quickly that while she loved country and roots music, she felt most at home when bending genre lines. It wasn’t uncommon for her to spin both Clint Black and Chaka Khan, developing into what she calls a “gangster June Carter,” with a laugh.


At barely twenty, she moved to Nashville, leaving behind a resume that boasted three hits on the Texas Music Chart: and while many arrive in town with a dream of their name in lights, resting on the marquees of the biggest and brightest venues, Morris simply wanted to work on her songwriting craft. And it’s not that she didn’t have aspirations as a performer – Morris had actually already logged years doing just that. But being a celebrity wasn’t the goal – spending her days and nights in the writing room, working with as many cowriters as possible and composing hundreds of songs, was. And though she’d only play the occasional local gig at first, she still managed to build an audience based on her sheer talent, honest lyrics and a completely magnetic presence. Small shows led to big opening gigs: for Little Big Town, Sam Hunt, Loretta Lynn and Chris Stapleton.


As a working songwriter she scored cuts quickly, for artists like Tim McGraw and Kelly Clarkson. And she started shaping a community of likeminded friends leading a new charge in the country climate: the Brothers Osborne, Kacey Musgraves, Lucie Silvas. “It feels like a modern-day Chelsea Hotel,” she says of her very close, very talented pals. They became a tight knit circle dead-set on helping each other evolve into unique, game-changing artists.


Along the way, she slowly and carefully started building the bones to her career as a performer again. “It wasn’t a conscious decision to be an artist,” she says. “It was more, am I ready to face my point of view? I would have been happy just being a songwriter, but there was a voice in my head saying, you’ve got to sing these.”


And so she did. Her self-titled EP gives a hint to what her forthcoming major-label debut on Sony Music Nashville will hold: and that’s one of the more inventive and engaging perspectives in country music to come along in years. The charts and critics agree – she entered the Billboard Heatseeker’s chart at number one, has been wracking up millions of spins on Spotify and was named one of Rolling Stone Country‘s Artists You Need to Know. Because few could find themselves drawing fans of both Bruno Mars and Bonnie Raitt, but Morris could – taking them to the special, wildly different world where spirituality comes through the FM dial and the stage is a place both to party and pray.


“The best part has been going off the beaten path,” Morris says. “I love to weed whack, and create something new. That’s when I feel most alive.” Amen to that.